Initially, searching through audio books at my local lending library it was the cover of this book that caught my attention, I had not heard of the author. 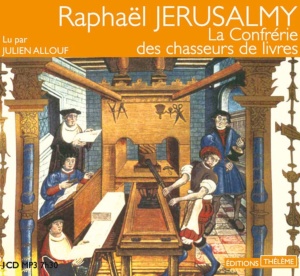 After graduating from the Ecole Normale Supérieure and the Sorbonne, and then working with Israeli military intelligence, the atypical Raphaël Jerusalmy is now a trader in antique books and an author.

After Jean Teulé in 2006, Jerusalmy basis his book around the medieval poet François Villon, who as well as being ‘the first poet of the modern era’ was also a brigand and a thief who after being condemned to death by strangling then hanging is pardoned but banned from Paris, soon after he disappears for ever. As Jerusalmy says ‘how could he resist such an invitation’.

Jerusalmy’s ‘Brotherhood of book hunters’ is a medieval conspiracy thriller which plays between Paris, Florence, Jerusalem and Rome. These are troubled times, Gutenberg is one of many printers operating in Germany, the inquisition is losing its battle outside of Italy and Spain, the powers of the Medicis in Florence challenges that of the pope in Rome, the king of France’s power is challenged by his brother and knowledge and writings are controlled by bigots. Against this background Villon is sent on a number of missions by the bishop of Paris which lead him on a quest to find writings from ancient civilisations which have been rescued and saved over the years by the brotherhood, a Jewish organisation who are slowly disseminating these works which could rock the very foundations of Christianity.

Shades of Dan Brown if you will, I found this an entertaining read.