“The evening when we first heard Sparsholt’s name seems the best place to start this little memoir. We were up in my rooms, talking about the club. Peter Goyle, the painter, was there, and Charlie Farmonger and Evert Dax. 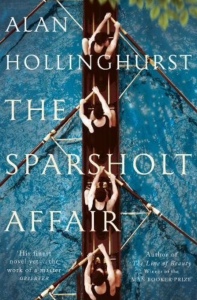 A sort of vote had taken place, and I emerged as the secretary, I was the oldest by a year and exempt from service”

Alan Hollinghurst’s novel chronicles gay life in a number of distinct episodes in England through two generations of the Sparsholt family. The book begins at the outset of the second world war at Oxford university illustrated at the first meeting of the memoir club in the opening quote where Goyle, Dax and the narrator of the first time period, Julian Green are are present and we hear of Sparsholt, a young freshman keen on rowing coming from an engineering family in Warwickshire with no real interest in books and only really filling in time before he is called up and seems so out of place with the upper class gays in the club:

“Oh, yes, him,” Evert said, as the source of the shadow moved slowly into view, a figure in a gleaming singlet, steadily lifting and lowering a pair of hand-weights. He did this with no apparent effort – but of course it was hard to tell from this distance, from which he showed, in this square of light, as massive and abstracted, as if shaped from light himself. Peter put his hand on my arm.
“My dear” he said, “I seem to have found my new model.” At which Evert made a little gasp, and looked at him furiously for a second.

Sparsholt is then indeed painted by Peter Goyle, a nude torso which is after Goyle’s death in the war later obtained by Dax. In this well described 1940.s Oxford it is also clear that Sparsholt is a more nuanced charachter than he may first seem and that gays even in these times should not be stereotyped.

In the second time sequence, we follow David Sparsholt’s family on a family holiday in the 60’s, a little before the actual Sparsholt affair, where we see that he has married his girlfriend from before his Oxford years, Connie, has a family but still prefers the company of his friend, Clifford, who is on holiday with his wife nearby, nothing is overt here, homosexuality is afterall still illegal. We are also introduced to his son, Johnny the narrator of the remainder of the book as he suspects nothing of his father but is himself discovering his own sexual tendancies in his early teens as he is infatuated with Bastien his French exchange student.

The second part of the book follows Johnny through his life in London as he first meets Evert Dax and then the rest of the Memoire club, this happens after the Sparsholt affair, a scandal involving his father, and follows Johnny as he matures and the grows older.

First Published in English as “The Sparsholt Affair” in 2017 by Picador.