—During the first lessons, they wanted to hear her talk about her earliest childhood…they insisted on her teaching them nursery rhymes….in total 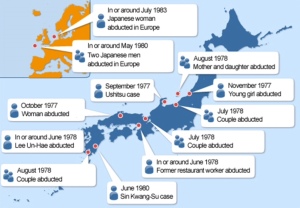 seriousness they repeated the songs after her until they knew them by heart, they drank in her childhood. Had she stumbled into a lunatic asylum?…one day looking at their uniforms, Naoko thought that maybe she was teaching killers nursery rhymes***

Éric Faye brings us here in Japanese Disapearances*** A novel based on the true story of state kidnapping by North Korea of a number of Japanese citizens that went unknown for 25 years or more as in the 1970’s and early 80’s almost incredibly, small groups of North Koreans surprised isolated young Japanese near the coast, popped sacks over their heads and rushed them onto boats. Since nobody imagined this state of affairs, they were often assumed drowned or having run away from home and the isolated incidents were not connected.

Faye tells us the stories of some of these people with romanced names, here for instance Naoko Tanabe who was kidnapped when she was 13 years old in 1977 near her home in Niigata or of Setsuko Okada kidnapped at 20 in 1978 from the island of Sado. No clear reason for these kidnappings seem obvious, other than that they could. Through these two illustrations we quickly understand the situation of total hopelessness in which they find themselves, isolated from the population, living through the continual North Korean doctrination, mostly unaware of other cases of kidnapping, forced to change their names and to police everything they say with no hope of leaving, hence the quote from Dante’s Inferno at the beginning of the book:

—Abandon all hope you who enter here

We learn that Naoke, still at a young age is asked to teach North Korean military to act and to seem Japanese as in the opening quote, yes, it’s not a country where they could just go to Japan to learn this. One of Naoke’s  « students » who is captured alive after bombing à Korean Air flight killing all of the passengers and crew tells the investigators of Naoke, but this information is kept secret thus neither her family or other families suspect anything for two more decades.

The North Koreans did not just kidnap Japanese and some had fates similar to  Setsuko Okada, who was cook and then married to an American deserter, Jim Selkirk in the book, who disappeared from the DMZ between the two Koreas in 1966.

We learn of the unlikely way a journalist puts together the story and the civil pressures of the families of these victims on the Japanese government to negotiate with (and of course to pay) North Korea to recuperate some of these victims. And of course after so many decades some had died and some did not come back.

The interest lies in the truth behind the book.