‘Amsterdam’s reputation as a city of sin always seems something of an anomaly to me as if one were to discover the presence of an immense crack den in the centre of Cheltenham Spa.’ 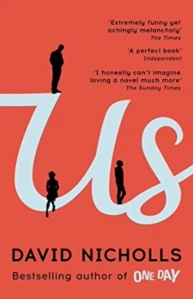 Well if you’ve been to Cheltenham Spa you will appreciate this typical example of the dry humour of Douglas, David Nicholls’ narrator and main character in his 2009 novel, Us, one of my English lit targets for 2016.

Us is the story of a family, Douglas and his wife Connie and their son Albie. As the novel opens, Connie in what to Douglas seems out of the blue, tells him she wants to leave him after twenty years of marriage. The story then follows two converging paths, the first being from the past as Douglas traces his life with Connie up to the announcement, and the second as Douglas organises a ‘Grand Tour’ of Europe for all three to try and persuade Connie to stay.

Some hints at the differences between Connie and Douglas are given in the present day after the announcement, when Douglas explains why he thinks they are together:

I’d always been under the impression that we were together because we wanted to be together, because we were happy most of the time I thought, we loved each other I thought, clearly I was mistaken, but I was looking forward to us growing old together, me and you growing old and dying together. Connie turned to me her head on the pillow and said:
-Douglas, why would anyone in their right mind have thought of that?

At the beginning of their story Douglas, a logical, conservative and literal scientist, engrossed in his work to the extent of having no social life and whose idea of imagination stretches to wanting to ensure a secure future, meets Connie, an imaginative ex arts student and would be artist, living life to the full as it comes, good or bad. Connie is on the bounce from a torrid relationship with a fellow artist.  Nicholls draws us the picture of  Douglas, before the meeting, with dry humour, epitomised by the following quote:

I was wary because parties and dinner parties in particular had always seemed to be a pitiless form of gladiatorial combat with Laurel garlands bestowed to the most witty, successful and attractive and the corpses of the defeated lying bleeding on the painted floorboards. The pressure to be one’s best self in such circumstances I found paralysing.

The answer to the question, how have Douglas and Connie’s view of life or their personalities mellowed and come closer together after twenty years of married life is brought into focus by their relationship with Albie their son, confrontational with Douglas, fusional with Connie and their diametrically opposed views of what is good for Albie’s future explains the underlying tensions which Connie lives as a straight jacket on life and imagination and which righteous Douglas finds to be a normal disagreement:

My son was soon to study photography on a three year course which we were financing and although my wife, who knew about these things, insisted that he had a talent, an eye,the fact of it filled me with an anxiety that I fought daily to suppress, at one point he had been intending to study theatre, theatre! at least I had managed to nip that in the bud

-Even if it’s hard he has to try, if he loves it he has to try, why must you always stomp on his dreams?
-I’ve got nothing against his dreams as long as they are attainable.
-But if they’re attainable then they’re not dreams.
-And that’s why it’s a waste of time I said, the problem of telling people that they can do anything they want to do is that it is objectively, factually inaccurate…….
-When did it start Douglas she said, her voice low, when did you start to drain the passion out of everything?

The Grand Tour is of course a disaster, Albie at 17, wanting to discover life had no interest in a family holiday touring European art galleries with bickering parents, I will skip this whole episode as the brush strokes were too thick for me although sugar coated by the dry humour.

Douglas is forced to look back at moments in their relationship where the early signs of misunderstanding were present and are still there to the present day, his example of reading tells us about their radical and opposed views, but also about how Douglas feels Connie sees him:

In the early days of our relationship, on a trip to Greece I think it was, I neglected to take a book onto the plane, it was not a mistake I would make again.
-What are you going to do for two hours?
-Oh I’ve got some journals, some work stuff, a guide book.
-But you haven’t got a novel to read.
-I’ve just never really been that bothered about fiction I said. She shook her head.
-I’ve always wondered who those freaks are that don’t read novels and it’s you, you freak, she smiled through all this, but I still sensed an incremental slip a loosening of my grip on her affections as if I had casually confessed to some racial bigotry. Can I really love a man who doesn’t see the point of made up stories.

At this point, I feel a little nuance in the characters is missing to make them real, outside of film that is. This makes me think a little of Notting Hill or of 4 Weddings in the character development. Probably a good film subject.