Why should a man help another man? No need. The world don’t care about that, world is just a passing parade of cruel moments and long drear stretches where nothing going on but chicoree drinking and whisky and cards. 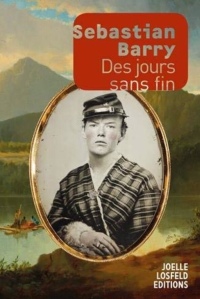 No requirement for nothing else tucked in there. We’re strange people, soldiers stuck out in wars, we ain’t saying no laws in Washington, we ain’t walking on yon great lawns. Storms kill us and battles and the earth closes over and no one need say a word and I don’t believe we mind.  Happy to breathe because we’ve seen terror and horror and then for a while they ain’t in dominion. Bibles wern’t wrote for us nor any books, we ain’t maybe what people do call human since we ain’t partaking of that bread of heaven.

The narrator, Thomas McNulty tells us the immigrant tale of the Indian wars, the Civil war and fear his beau John Cole in an America where men were men and well, there really weren’t any women. In this book read for the Roman de Rochefort prize, three main themes prevail, firstly as illustrated by the opening quote, the boredom interspersed with savagery of the army, secondly hunger, from the death of the whole of McNulty’s family from famine in Ireland to the deaths of most of the “passengers”, who were of no value, on the trip to Canada and the subsequent quarantine on to hunger wandering in America, to the hunger of the Indians and even the hunger of the soldiers who were saved from starving to death by the very Indians they were fighting. As McNulty once says with typical Irish humour hiding his fear:

I was so hungry I could eat the head of John the Baptist.

The third theme throughout is the absence of women in the frontier lands, from the starving boys Thomas and John Cole getting work in a saloon in a frontier mining town dressing as women in shows for the miners through to their living every waking and sleeping moment together in the army forts where despite their discretion there can be no secrets and finally their living together in their remote farm as John and Thomassina, once again wearing dresses, with no sense of right or wrong, guilt or innocence, just peace at being who he is.

So onto the Indian wars, where the soldiers, amid both food and female deprivation become in the heat of the action animals rather than humans, captured by Sebastian Barry in the mouth of his narrator whose rural background shines through his simile after the troop had just killed all of the children and squaws of an Indian village and two of the troopers, Watchhorn and Pearl had raped some of these women, a crime the army shot them for:

The troopers worked until I believe their arms could do no more, Watchhorn and Pearl Rutting and shouting then ruthlessly killing again till in runs the major, shouting the loudest with true horror in his face shouting his orders, wild to bring a stop to things then we were all of us standing there panting, our cold sweat pouring down exhausted faces, our eyes glittering, our legs trembling, just like you would see dogs do after they had been killing lambs.

So how does Barry imagine a starving detested Irishman’s views of what was happening to the Indians:

The padre made a huge prayer out in the open and the whole town went down on its knees right there and praised the lord. this was the section of humanity favoured in that place, the indians had no place no more there, their tickets of passage were rescinded and the bailiffs of god had took back the papers for their souls. I did feel a seeping tincture of sadness for them I did feel some strange toiling seeping sadness for them, seven hours off buried in their pits….. there weren’t no padre praying in exhaltation for them they were the boys with the loosing hand….

The second great war McNulty and John Cole are witness to is of course the civil war, they sign up expecting like many others a short war and after initial victories they begin to understand how pernicious a civil war can be when like fight against like, often with no understanding of why as illustrated below:

The captains give the order to fire and the thousand muskets give voice and fling their rounds of shot towards those walking demons, Johnny reb with his skinny legs and his butternut rags and all he thinks about and thinks good carried under hats of all descriptions. South don’t got  uniforms, grits or oftentimes shoes, half of these fierce looking bastards have bare feet, could be the denizens of a Sligo slum house, goddammit probably are some of them. On they come, I can see the regimental banners now better, and this damn one at centre coming on has shamrocks and harps, just like ours. Usual crazy fucking war..

Overwhelmed in battle, they are ordered to surrender and near starve to death in captivity, McNulty remarks that it wasn’t because they were ill treated, their captors had no food either, the crops had been distroyed during the war.

The book kept me interested throughout and the voice of McNulty rang true to me.

First Published in English as “Days Without End” in 2017 by Faber & Faber.
Translated into French by Laetitia Devaux and published as “Des Jours Sans Fin” by Joëlle Losfeld in 2018