THE BEDROOM IS strange. Unfamiliar. I don’t know where I am, how I came to be here. I don’t know how I’m going to get home….It is then that I hear a juddering intake of breath behind me and realize I am not alone. I turn around. 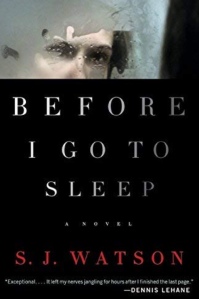 I see an expanse of skin and dark hair, flecked with white. A man. He has his left arm outside the covers and there is a gold band on the third finger of the hand. I suppress a groan. So this one is not only old and gray, I think, but also married. Not only have I screwed a married man, but I have done so in what I am guessing is his home, in the bed he must usually share with his wife. I lie back to gather myself. I ought to be ashamed.

In this, Watson’s first published book, ‘Before I go to sleep’ a thriller, the story begins as Christine wakes, reasonably supposing she has partied too hard and discovers the man she is in bed with, seethe opening quote. But then as she sneaks into the bathroom the shock is total when she looks into the mirror and sees a lady in her fifties looking back at her and the begins to scream. Christine is suffering from a rare form of memory loss where whenever she sleeps her memory of the day she has lived is wiped clean and this has been going on for twenty years!

So much for the base on which the story is then built, this idea was already investigated by Jonathan Nolan’s Memento Mori, where Earl uses notes and tattoos to keep track on ideas. Here Christine is broken out of her Groundhog Day, waking each day with no memory of events and discovering the same things each day with her husband calming her and explaining the situation to her before leaving for work, when she is contacted by a doctor who persuades her to keep a private diary and who phones her every day to tell her where to look as she the discovers from her accumulated writing the inconsistencies in the information she is given by her husband.

Can a person with no memory exist, have an identity, a question Watson puts forward through Christine’s questions to herself:

There, in the bathroom, I thought of my old age. I tried to imagine what it will be like. Will I still wake up, in my seventies or eighties, thinking myself to be at the beginning of my life? Will I wake with no idea that my bones are old, my joints stiff and heavy? I cannot imagine how I will cope when I discover that my life is behind me, has already happened, and I have nothing to show for it. No treasure house of recollection, no wealth of experience, no accumulated wisdom to pass on. What are we, if not an accumulation of our memories? How will I feel when I look in a mirror and see the reflection of my grandmother? I do not know, but I cannot allow myself to think of that now.

As for the thriller, well it can only work if things are not what they seem, and of course they are not, what more unreliable narrator than one with no memory. As the story progresses though, as Christine strings together day after day in her diary, is her memory beginning to come back or is she embroidering adding layer after layer of almost truths? Is there hope? What do you imagine?