-Chief Valdez ….when he was with the LAPD….ran afoul of a lieutenant named Pounds, who filed an internal complaint and unsuccessfully attempted to have Valdez demoted or even fired. 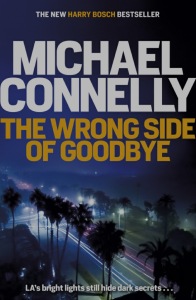 Valdez avoided both and just a few months later heard about a detective named Bosch who himself got into an altercation with Pounds and ended up throwing him through a plate-glass window at Hollywood Station. Valdez always remembered that name, and years later when he read about a now-retired Harry Bosch suing the LAPD for forcing him out of his job on the cold case squad, he picked up the phone.
Valdez couldn’t offer Bosch a paycheck, but he could offer him something Bosch valued more: a detective’s badge and access to all of the tiny city’s unsolved cases.

So Bosch is back, no longer with the LAPD whose hierarchy Connelly has milked to death in this long series, but as an unpaid detective in San Fernando -Barely bigger than two square miles in size….an island city within the megalopolis of Los Angeles working the unsolved crimes. The release from the LAPD lets Connelly take us back to the fluidity of some of his earlier works such as Black Ice or The Poet  and leaves the reader without that empty feeling of ‘why did I read another one of these?’ that some of his later works have left me with. That said, writing this a week after reading it I have completely forgotten the story and have had to re-read parts to remind myself.

This is then, as is to be expected today a book with two non-intersecting mysteries whose only common point is the detective and his limited time to handle two affairs. (I’ll have to read some of his earlier works to see if it was the fashion then) The first affair is a private detective affair where Bosch is contracted by Whitney Vance, a very old billionaire, at the centre of an industrial giant, who is without offspring, to find a woman he had been close to in the 50’s and to see if he had any descendants through her.

-What do you want me to do? Bosch asked again.
-I want you to find someone for me, Vance said. -Someone who might never have existed.

But of course this won’t be straightforward

—Don’t be naive, Mr. Bosch. I am sure you conducted a modicum of research before coming to see me. I have no heirs, at least known heirs. When I die, control of Advance Engineering will go to a board of directors who will continue to line their pockets with millions while fulfilling government contracts. A valid heir could change all of that. Billions could be at stake. You don’t think people and entities would kill for that?

The second affair is with The San Fernando police and a serial killer, where no one before Bosch had dotted the ‘i’s and crossed the ‘t’s And realised that the cases were linked.

I did read this through quickly, the mystery and twists held to the end, and if I should forget, do remind me never to volunteer to be Bosch’s partner!