Mother had put out a table cloth and layed a box on my sisters plate….My sister let out a cry of surprise as she unfolded the scarf, 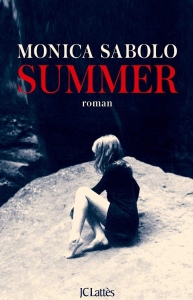 whose bluebird seemed more alive than ever, then she stood and took my mother in her arms…… I had the feeling that I had watched a heartbreaking ritual, as if my mother had offered her youth and her beauty to her daughter.***

Monica Sabolo presents us a story of the disappearance one summer day soon after her nineteenth birthday, at a family party on the shores of Lac Leman, of Summer Wassner, in this story read for the “Roman de Rochefort”. As Benjamin, Summer’s brother, five years younger than her, years later, slowly unfolds the tale of the mystifying dissapearance of his sister from her ideal family, a dissapearance which utterly destroys his own life and that of his parents, we slowly realise that Benjamin is, despite himself, an unreliable witness, as he relates key moments of the story, such as his own frustration when his father buys an aquarium for Summer:

My father loved water as well….For her ninth birthday, he bought Summer an aquarium with a complex system to filter and to add oxygen to the water and which hummed continually…..two folding chairs were placed just in front , and that’s where I found Summer and my father, sometimes early in the morning, absorbed in watching an illuminated under water forest.***

We must remember that in spite of the maturity of Benjamin the narrator, at the time of the events, on Summer’s ninth birthday here for example, Benjamin was only four years old. He is nonetheless haunted by this day as we slowly realise from the dreams he relates to his psychiatrist which we initially assume refer to Lac Leman from whose bank she dissapears:

Summer is there. She’s wearing a blue night shirt, which floats around her like wings or fins, the smooth  oscillations of a skate.***

This story is narrated by Benjamin, after he suffers an unexpected nervous breakdown, as he says he has barely consciously thought of his sister in years. He is forced to revisit the unsolved events, talking to certain of the people present that day, Jill his sister’s closest friend and his own ex-lover, and his parent’s closest friend of the time, Marina Savioz. Benjamin is slowly brought to question his own certitudes of the idyllic life of their rich family living on the shore of Lac Leman. There are certain clues such as his mother’s  reaction when his father’s friends compare her to the pre-adolescent Summer:

“They look like sisters”,  called out dad’s friends, as they moved towards them on the loose gravel in light dresses, and mum blushed, pushing back a strand of hair which was coming loose from her poneytail…..It’s true that mother looked like an adolescent, with her lean look, the way she smoked, a certain tendency to provocation.***

As Summer moves into adolescence her relationship with her mother becomes, naturally, strained with the story of the scarf, illustrated in the opening quote, epitomising the rift, a scarf which has great sentimental value for Benjamin’s mother and which Summer is always stealing until one day she hands it over to Summer, only for Summer to no longer want it.
Slowly as the family secrets are stripped away by the different people that Benjamin finally takes it on himself to visit, he forces himself to see the secret he has been hiding from himself all these years.  He then confronts the inspector that had been charged with the case with something he remembered the inspector telling him years before:

“you once told me that you always find people eventually, they leave a trace, didn’t you?”
“Its true, nearly always, yes”***

This is a powerful well written story of loss, trust and betrayal I recommend it.

First Published in French as “Summer” in 2017 by JC Lattès.
*** my translation