“You know what fathers and sons are like”
“Not really, no.”
“They’re our guides into manhood, for starters.”
She’d never really understood this, though she’d heard and seen enough anecdotally and academically to know there was something to it. 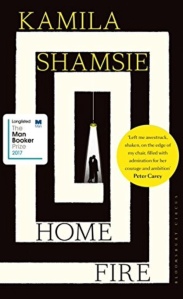 Welcome to my second review of a book using Antigone as its thread, the first was Chalandon’s Quatrième Mur and here Kamila Shamsie’s Home Fire. Both books, as well as Sophocles of course are necessarily set in times of conflict, Chalandon’s in the Lebanese civil war of the early 1980’s where his Creon was Christian, his Antigone was Palestinian, his Haemon was Druze and his play included Chiites, Chaldeans and Armenians. Shamsie’s book is set in the current Syrian conflict, and is a thoroughly modern telling of this classical  tale. what all three have in common is that they are studies of people in times of conflict.

Shamsie, as Sophocles, brings us a tragedy, men blind through power bringing about their own personal downfall. The King Creon in the case of Sophocles who pushes his own niece Antigone and his son Haemon to their deaths and in doing so loses his wife, Eurydice, all this in trying to cement his power. Shamsie brings us Karamat, the British Home Secretary and second generation Pakistani immigrant in the place of Creon. But to this classic story, Shamsie brings us a study of the role of fathers in the coming of age of their sons, see the opening quote by Eamonn, Karamat’s son, and of the mechanism of indoctrination of fragile European youth into The Islamic State through Parvaiz.

The story is told in five parts by five different narrators, beginning with Isma, who has brought up her younger brother and sister, the twins, Parvaiz and Aneeka after their mother’s death, their father, Adil Pasha, had abandoned his home before the twins were born to fight in Bosnia, Chechnya and the Kashmir before dying in transit to Guantanamo. The twins having reached school leaving age, Isma can pick up her life again and heads to the USA for a PhD. Through Isma we are introduced to all of the main protagonists of the story, her brother and sister, a second generation English Muslim politician Karamat Lone:

Isma and her mother had approached Karamat to get information about the death of their father, on the way to Guantanamo they had heard  unofficially, he had refused to help them and was now Home Secretary. And finally Eammon, Karamat’s son who Isma meets in America:

How they laughed in Wembley when the newspaper article accompanying the family picture revealed this detail, an Irish spelling to disguise a Muslim name— Ayman became Eamonn so that people would know the father had integrated. (His Irish-American wife was seen as another indicator of his integrationist posing rather than an explication for the son’s name.)

She realises he is not like his father but although confiding in him about her father and her brother Parvaiz who we are learning has disappeared from his life in Wembley, she cannot go past simple friendship. Before returning to England, Eamonn sees a picture of the beautiful Aneeka at Isma’s appartement.

In the second part of the book Eamonn and Aneeka become lovers, Aneeka initially we learn later, to try to help her brother who realises he has made a mistake in going to Syria and wants out, to come home. The thing is that Karamat has managed to pass a law removing citizenship from dual nationals engaged in Syria, and Aneeka hopes to influence Karamat through his son. But life is not a plan and Aneeka falls in love with Eamonn who decides to intercede for her with his father.

In the third part of the story we follow the indoctrination of Parvaiz, a part of this book is the study of boys becoming men and the respective rolls of their fathers, Eamonn and his father caring for him versus Parvaiz who does not know his father, here the recruiters use this need for a father as a hook as in this conversation between Parvaiz and Farooq:

“I never knew my father…..”
“He regretted that.” The stranger said, “that you never knew him. He fought with my father; I heard all the stories of the great  warrior Abu Parvaiz.”
“That wasn’t my father’s name. It was Adil Pasha.”
“It was his—“ The man said something that sounded like numb digger. “That’s French for jihadi name….. When he entered the fight for justice he called himself Father of Parvaiz. That was his way of keeping you close……”

We learn that Parvaiz contacts his sister Aneeka wanting to come home helping us to understand the events of the previous section, Aneeka’s relationship  with Eamonn. From here on in the last two sections narrated by the inflexible Karamat and then Aneeka who has no limit to her wish and actions to repatriate her dead brother, the tragedy of Sophocles’s Antigone plays out up until the breathtaking end.