Booker International Prize 2021: 6 Books shortlisted for this prize.
“In Memory of Memory”: In order of reading book number 4.

I must have been about twelve. I was hunting around for something interesting to look at. 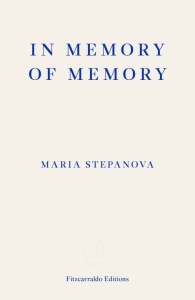 There was plenty of interesting stuff: with every death a pile of new objects appeared in our apartment, deposited just as they were, trapped in a sudden end state, because their previous owner, the only person who could have freed them, was no longer amongst the living.

I don’t know who chose the shortlist for this prize this year but he certainly wanted to make it difficult to follow. I guess there must have been some powerful lobying. I’ve read doctoral theses with far less references. I had assumed this to be a fiction prize but it would appear in this case not and I should confess up front that my Kindle tells I only managed 42% of this particularly long book (I never normally give up during a book).

The opening quote tells us something of the subject, do memories die with the person and what do we do to prolong them, firstly our own before we die and secondly those of others after their dissapearance. How have momories changed and our understanding of them from the time of the handwritten letter to the time of the selfie. Stepanova then takes us through the twentieth century, its pogroms and revolutions, state terror and the Shoah and of the terribly small chance of a Jewish family to have lived through these times intact no matter which choices they had made at the turn of the century.

The children of the turn of the century had three choices before them, and they all looked much the same. Revolution, assimilation and Zionism

How in this situation of mass interruption of the memory line can or should the memories of these whole families, whole communities, whole people be assured. This is as far as I got, the premise seems interesting and should be. As I’ve mentioned, I’m a stubborn reader, good luck with the others.

In contemporary Europe, with its barely healed wounds, black holes, and traces of displacement, a well-preserved family archive is a rarity.

First Published in Russian as “ПАМЯТИ ПАМЯТИ” by Novoe Izdatel’stvo in 2017.
Translated into English by Sasha Dugdale, and published as “In Memory of Memory” in 2021 by Fitzcarraldo Editions.