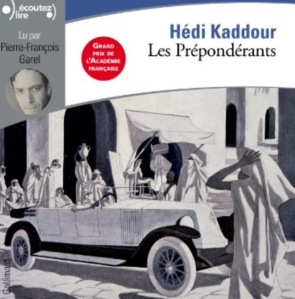 This remarkable book is set at a turning point in the French colonial experience, the aftermath of the Great War. The comfortable pre-war colonial status quo was under pressure from the changing world, against a background of Egypt declaring its independence from Great Britain and  Attaturk installing a secular regime in Turkey.

Into this background in 1922 an American film crew arrive in an imaginary town, Nahbès in the Magreb, straining the ways the different groups in society, the French settlers (Prépondérants), the Arab traditionalists, the youthful Arab nationalists searching for a way forward. Hédi Kaddour shows us throughout this book that despite these rigorous divides all is not monolithic.

Hédi Khaddour paints an impressive picture of the period with the settlers sure of their ways, describing a particular episode of missing wine bottles at a country pick nick, the severe physical punishment of an Arab worker designated as the thief, only to find the bottles were stolen by the local policeman’s children and the way each party present then manages to save face, the worker is paid but no excuse is given nor apology is issued, we are asked if this is enough and the settler answers but of course, his own people already know he is innocent.

The de-facto segregation between the peoples where the Eoropeans live in the European town and the Arabs in the Arab town excepting the Arab merchants who supply the European market is ensured by both sides and particularly by the Arab women:

‘The women in particular are terrible says Marfin, since they are stopped from having contact with the outside world they then want there to be next to no contact for the men. Hachouma, shame, they are always being served this word, so they have taken it and have turned it on their lords and masters. So and so was seen at a reception at the Civil Controler’s, Hachouma, such and such went to France for business, Hachouma, so and so  has had a European style suit made, Hachouma, they don’t dare say anything about the presence of their men at the cafés in the Medina, but if it is a café in the European town, Hachouma, they have become the guardians of their prison guards’***

This segregation is put to the test by the American film crew at their hotel parties where Arabs, Jews and even Italians mix with the French and Americans, the conservative forces of both communities would like to put an end to this but the film director has been received and decorated by the monarch in the presence of the French ‘Resident Generale’ and thus nothing can be done.

Finally this book is about a series of impossible relationships with the most mysterious being between the young widow Rania and either the French settler, Ganthier or the young Arab nationalist Raouf, we never learn which.

There are a number of notable inter-crossing stories in this book, such as the imprudence of a local merchant who finishes by denouncing Raouf to the French police and the subtle way Si Ahmed, Raouf’s father  destroys him, using his own weaknesses and greed.

This denunciation leads to Si Ahmed persuading Gantier to take Raouf on a tour of Europe whilst things cool down for him in North Africa. In Europe Raouf communistic leanings cool off and there is a particularly savoury trip to the Alsace where Raouf observes:

‘It’s true that from 1870 the Germans backed your colonial conquests to distract you from Strasbourg? We were made to pay for your defeat? And then in 1918 the Germans really left and went to the other side of the Rhine, after all those years spent in Alsace, even those that had bought their land, put up their buildings, their factories, left without any indemnity? That is good decolonisation’***

I have a special mention for the historical irony of Ganthier’s comments in the French occupied Rhinelands:

‘They stopped in front of a building to watch a shiny iron curtain slowly and silently lowering to the ground.
The people here really have the idea of faultless mechanical systems in their blood said Ganthier, it is fortunate that the Versailles treaty obliges them to write “Made in Germany” on their products, that protects us.’***

On their return to Nahbès, it is noticeable that both Gantier and Raouf have changed their positions have grown closer, as Rania says on leaving the market:

‘On leaving, they came across Raouf and Ganthier….through the veil covering her face, she called them the “protectorate in two volumes”, then turning towards Gabrielle ‘you know what is happening don’t you? They see each other so often that they are rubbing off on each other and one day each one will see the other in his mirror’***

No good end tends to come in colonial stories and this book is no exception, an act of God accompanied by human weakness brings about the death of one of the major protagonists revealing the complex feelings and links between them.

I most enjoyed this book and my review has only just touched the surface, missing out on several key figures and events, I heartily recommend this book!

First Published as “Les Prépondérants” by Gallimard in 2015
*** my translation