“Booker Prize 2021: 6 Books Sure to be shortlisted for this prize.
“No One Is Talking About This”: In order of reading book number 5.

SHOOT IT IN MY VEINS, we said, whenever the headline was too perfect, the juxtaposition too good to be true. 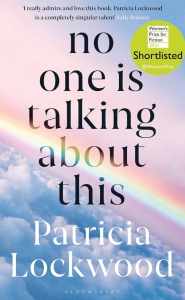 SHOOT IT IN MY VEINS, we said, when the Flat Earth Society announced it had members all over the globe.

I sometimes wondered what it must have been like to have your whole idea of what a story or novel is put in question, for instance for the pre-war audience to wake up to discover the Beat Generation “From William S. Burroughs’ cut-up technique (the splicing of a document, rearranged to create new meaning), to Jack Kerouac’s stream of consciousness, the Beats forged new formats through their innovative and experimental approaches toward literature.” Well here I’m faced with writing shaped by the internet, short attention span paragraphs unlinked to each other but slowly forming a whole, a message in the first half of this book, here are a few:

A twenty-three-year-old influencer sat next to her on the couch and spoke of the feeling of being a public body; his skin seemed to have no pores whatsoever. “Did you read . . . ?” they said to each other again and again. “Did you read?” They kept raising their hands excitedly to high-five, for they had discovered something even better than being soulmates: that they were exactly, and happily, and hopelessly, the same amount of online.

And after losing herself online, the narrator is faced with reality in the second part of this book, told in the same short sharp paragraphs which after seeming void, empty, vaguely humorous in the first part, in this second part they become a little more linked to each other, although rarely directly. This same approach becomes caring, alive, touching and human; quite some feat!
Reading the acknowledgements afterwards it seems this experience in the second part is based on Lockwoods own family, and hence her own life, there is then little doubt that the first part is also based on her life. I’ll let you discover this story, but here is a sounbite:

Dread rose in their hearts upon hearing the worst seven words in the English language. There was a new law in Ohio. It stated that it was a felony to induce a pregnant woman before thirty-seven weeks, no matter what had gone wrong, no matter how big her baby’s head was. Previously it had been a misdemeanor, a far less draconian charge. The law itself was only a month old: fresh as a newborn, and no one knew whose it was, and naked fear on the doctors’ faces.

This is experimental writing, and required me to hang in there in the first section, even if some of the paragraphs were mildly humorous. The narrator after sinking without trace into the portal is dragged out by real life, by emotions and later after the events of the second part we know she’ll be pulled towards it again but she will not fall in.