The combination of Roman disinterest for things of the mind and the Christian hostility to knowledge not dependant on God or his saints had tragic consequences for the survival of the sciences. The first to suffer the effects was Hypathie, the first great female mathematician in history… 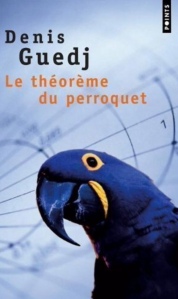 One day in 415 AD, the population, prepared over a long period of time by the Patriarch of Alexandria, rushed her charriot, pulled her to the ground, stripped her and dragged her to a sanctuary. She was tortured using razor sharp oyster shells before being burnt alive….
Lea looked towards him, she was pale Mr. Ruche blamed himself for giving too much unnecessary detail.
“A single female mathematician in the whole of antiquity and she’s tortured and burnt to death!”
And in total seriousness, she muttered:
“And we wonder why there aren’t more women studying maths.”***

Denis Guedj was a French novelist and a professor of the History of Science at Paris VIII University and wrote a number of books to try to bring maths to adults. In his Parrot’s Theorem, Guedj sets a murder mystery in a framework to present the history of mathematics from its early beginnings with the Greek mathematicians up to the 1990’s and the demonstration of Fermat’s  Last Theorem.

Pierre Ruche is a retired librarian, in his eighties and confined to a wheelchair living in his converted garage in Paris and he has given over his house to Perrette
And her three children that PIerre hasn’t really got to know since they’ve been living next to him. The story begins with two seemingly unconnected events, Firstly Pierre receives an unexpected letter from the Amazon adressed to him using the name πr, from an ald frind Grosrouvre that Pierre hadn’t seen since the war and learn that the two Had been well known students at the Sorbonne together:

Mr Ruche was reading philosophy; Grosrouvre, maths. While there, both began to write. Ruche published a much-admired essay on being; Grosrouvre wrote a highly acclaimed thesis on the number zero. They were inseparable –other students jokingly called them ‘Being and Nothingness’. When Sartre published his essay some years later, Mr Ruche suspected he had stolen the name, but he couldn’t prove it.

The second event takes place when Max, Perrette’s youngest son, who is deaf, saves a rare Parrot from two gangsters and brings it back to the house.

Grosrouvre sends Pierre Ruche his rare mathematical library before he is found dead in his burned library in Manaus, in trying to solve the mystery of why Grosrouvre should be killed, by whom and why he should send his rare library from Manaus to Paris we embark on a voyage of discovery of the history of mathematics, the initial quote about Rome being typical of the treatment, and pierre Ruche discovers the close links between mathematics and philosophy as well as getting to know the family he lives next to. The centuries of the advancement of mathematics in Bagdad were unknown to me, in the importance or in the scale as the following quote concerning the Beit al Hikma (the House of Knowledge) shows:

—The importance of the house of knowledge came from its translators. There were dozens who came from all over, working on manuscripts coming equally from everywhere. The exceptional diversity of the languages from which the translation took place made up a learned Babel: Greek, Sogdian, Sanskrit, Latin, Hebrew, Aramaic, Syriac, Copt…..
In the huge calligraphy workshops, armies of scribes worked nonstop. The works, written in Arabic now, began to fill the the bookshelves of the House of Knowledge. The number of copies increased! Everything was ready so that through these works, newly available, the knowledge collected from elsewhere should spread throughout the immense Arabic empire.***

If you are interested in the history of mathematics, this is a light introduction, and what is the probability of the parrot and Grosrouvre being connected? well mathematically speaking highly improbable but not impossible.