-All was so clear when one held a letter in one’s hand, one’s handwriting was intimate, a reflection of one’s deepest nature. Cornelius had spoken volumes, page after page of his flowing script had comforted and lead and reassured her, he’d questioned with her, answered, deepened their bond to one of lasting strength. 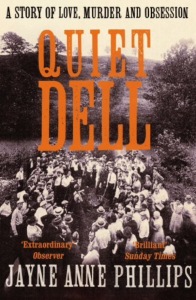 This Book is the story of Harry Powers, the Bluebeard of Quiet Dell as the newspapers of the early thirties called him, but also of his victims, of how he operated and of his trial.

The first part of the book written as a nineteenth century novel describing one of the two key families in the case, the Eicher family, although long, helps us to better understand the women in the 1920s-1930s who wrote looking for friendship. Asta Eicher was completely dependant on her husband, a housewife bringing up her children with her husband’s mother living with them, initially her husband was thinking of leaving them for another woman and as her mother in law tells her:

-Lavinia, regal,kindly poured the tea. Aster, hear me out, in this world in which women have so little freedom and enjoy so little regard it is not always a bad thing to share a man, openly or not if all are happy, and it is not such an unusual arrangement amongst artistic people that alliances be discreet, particularly when there are children involved.

Aster was left with no income when first her husband died suddenly and then her mother in law, she had taken in a lodger, Charles who had ‘inclinations’ and had re-mortgaged her house and as funds were running low, Powers, under an assumed name writes to her, promising security for her in West Virginia. But Powers was an astute con man and did not just promise security in his letters:

-All was so clear when one held a letter in one’s hand, one’s handwriting was intimate a reflection of one’s deepest nature. Cornelius had spoken volumes, page after page of his flowing script had comforted and lead and reassured her, he’d questioned with her, answered, deepened their bond to one of lasting strength

In the summer of 1931, Powers, as agreed, comes to Chicago to pick up Aster in his automobile, takes her back to Quiet Dell where he tortures and murders her before coming back for the children to do the same.

In the second part of the book written as a journalistic investigation lead by Emily Thornhill a Chicago reporter we meet several of the true characters on whose names she remarks,  Defense Attorney Law, a murderer called Harm, and Sheriff Grimm with whom she strikes up a working relationship. Grimm tells us of the situation surrounding the case and of how Powers was caught:

-Grimm had spoken of dozens of enquiries from relatives of missing women how many more had inspired no search? Might Powers have killed a hundred women……police took little notice of willing disappearance, if Powers picked the right victim and bade her come to him, he might leave no trail at all, he travelled constantly and must have done so for over a decade previous to the four years he’d lived in Clarksburg. The EIchers had no money, Powers was caught because he went back to Park ridge for radios and rugs, determined to realise a profit.

Finally, Powers was not tried for the murder of the Eicher family but of that of another of his victims from the same period, Dorothy Lemke.

A slow beginning but an interesting re-telling of this true story.

First published as ‘Quiet Dell’ by Vintage in 2015