—The infamous Golden Rule inserted by force in our largely unimplemented constitutions, 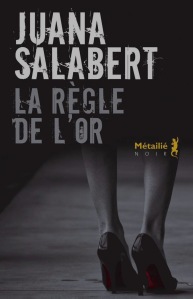 with which the Troika and their obedient local vizirs probably wipe their noses every day..***

Juana Salabert’s police mystery, read for Spanish lit month, is an angry story set in Madrid in 2012 at the height of the public indignation surrounding the arrogant treatment of the southern European countries during the debt crisis, with austerity imposed through external pressure on these countries and the entailing social misery, and is one of the meanings of the title as illustrated in the opening quote.
Inspector Allarde is inspecting the second “Cash for Gold” killing, jewelers that in these depressed times are making money from buying gold and family jewels have been targeted by a killer who signs his crimes with a clear message:

—To the loan shark. To the thief of carats and of lives. Vengeance is acted and will be again.***

A third killing takes place which at first seems to be one of the series but Allarde is not sure. This is a story of cupidity, greed and blackmail and as always the question is just how low will people stoop for money and how much is enough, leading to another possible meaning for the title:

—The only Golden Rule that works for money, for truly huge sums, for a fortune accumulated and overflowing and which is fructifying far from its owners eyes, is that it never seems enough.***

Salabert’s Madrid is a desperate and hurting place lived in by people just getting by and is an ideal background for a book about greed. I did at times think that the subject and the hero were the people of Madrid and not the detectives in the story, but only for fleeting moments, as the story itself is well constructed. This may well be the Author’s intent.

First Published in Spanish as “La Regla del oro” in 2015 by Alianza.
Translated into French by Myriam Chirousse as “La règle de l’or” and published by Métailié in 2017
*** My translation