-young as I was, I hated the circumstances of my life. I hated the carrying of bundles of washing. I hated the turning of the mangle, and most of all I hated the close compression of a life that threw us all upon one another by day and night, 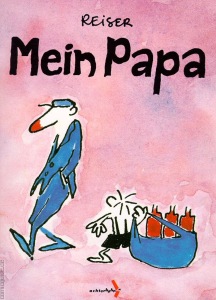 and made us bite and snarl, and gave no one the chance to be alone.

I read this book in French titled ‘ La fille sans nom’ for German lit month VI, the subject is twofold, treating firstly the incredible energy of the protagonist, the young girl, to escape from her abusive mother and secondly bursting the myth of a caring socialist state in the former DDR, where there was no place for the problem child she was to become. The book begins by describing her abusive home life where her mother takes up with various men, including her father, the only continual thread is the drunkeness and sadism of her mother towards her and her younger brother, reminding me of a book cover by Reiser:

-Her mother gives her money and sends her to Jahn’s. The bistro owner carries the bag full of beer for her all the way to the door…Her father is thirsty, very thirsty. He quickly drinks all of the beer. That evening she is back and forth to Jahn’s several times, the bistro shuts well after midnight.***

Her mother beats her and her younger brother often, even playing games they can’t win to decide if they should be beaten, 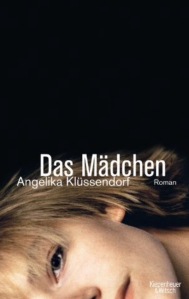 and she learns to understand when the mother will lose control and understand that there is nothing they can do to avoid her punishments, the regularity of these is part of their life, for them it is normal. Is it any wonder that her favourite book at this time is The Count of Monte-Cristo:

-But that day her mother’s anger is concentrated entirely on her daughter. After receiving her beating, Alex has the task of taking her to the cellar. When he has double locked the door she can breath and takes in the familiar smell of coal dust and damp walls……She moves around the cellar, reads the inscriptions she has carved on the walls but can no longer remember what they mean.***

Firstly the state social services are sent by a teacher but notice nothing untoward; they had given notice of their visit. Then after several attempts to run away from home, where she is picked up by the police and taken back again, finally she is taken to the Hans and Sophie  Scholl hostel where the overtly socialist government propaganda is so at odds with her reality:

-The stairs leading up to the upper floors have a small landing where a glass fronted display panel can be found in which are hung the Ten Moral Commandments of Socialism. The second commandment says: “you should love your fatherland and be ready at all times to fully engage yourself to defend the power of the workers and the peasants.” How could she love a whole country, she asks herself, when she can’t even love her family?***

Klüssendorf presents us with the brutality and lack of care in the state system, amongst other things her name is placed on the list of “negative” children. Here too her treatment by adults is random, giving her no idea of justice, still not fourteen years old, she then runs away again to go back and see her brothers but is caught once more by the police and locked up over Christmas in a barred cell.

The girl reads and reads, and one day she discovers a book where she feels at once understood for the first time in her life, “My Son, My Son” by Howard Spring from which is taken the initial quote in this post. Then in her last year before leaving the hostel she begins duplicating her mother’s treatment of her on a younger girl:

-Poupi Never defends herself, she just crystal in silence when she has to hold out the two pillows one right and one left at waist height and woe betide her if the pillows lower. In which case she beats her or Poupi picks up some other punishment***

A successful picture of an abused youth in a DDR with no human place for social problems, but the sheer energy to survive shines through.