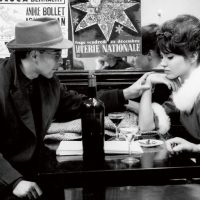 At the start of the Algerian war Ali hadn’t understood the independentists’ plan. He saw the French army repressions as terrible consequences which the FLN in their blindness hadn’t envisaged.

He had never imagined that the strategists of the liberation had predicted and even hoped for them, knowing that they would make the French presence detestable in the eyes of the people. The strategists of Al Qaïda or of Daech have learnt from previous wars and they know that killing in the name of Islam will provoke a hatred of Islam and over and above this a hatred of dark skin, beards and head scarves leading to violence… it’s not collateral damage as Naïma thinks, it is precisely this their aim; that the situation becomes unsupportable for all of the European dark skinned populations and that they will be obliged to join them.***

Alice Zeniters sweeping novel of three generations of a family, of Naïma’s grandfather forced to leave Algeria for France at the end of the war of independence with his wife and children, of Naïma’s father Hamid, uprooted as a child from Algeria, and the silence around his life and then Naïma herself, living without understanding her roots. Zeniter applies some modern day perspective on Al Qaïda or Daesch as illustrated in the opening quote.

She examines Ali’s life in the first third of the book, taking time to set the scene as at the beginning of the war of independence Ali is a respected figure in his remote native village in Kabylie, where two separate generations of soldiers, those having fought for France in the First World War and those having fought for France in the Second World War met regularly at their association building, drawn by shared memories amongst the age groups and differences between the two groups. Slowly the FLN, a group that seem to have no real power, -how could they against the French occupier whose army Ali had seen close up, – appear in small numbers and then after a high profile FLN massacre the Army appear:

For the first time in Ali’s village, a column of jeeps arrive full of French soldiers with faces full of anger. They drive the villagers out of their houses striking them with their rifle butts. They make them lie on the ground, hands above their heads as they overturn and search the interiors, smashing jars and slashing beds. they are so brutally erratic that it’s clear that they don‘t know what they are looking for.***

The army then take Ali’s brother, Hamza, and two other villagers prisoners, but only Hamza returns, thus dividing the villagers into two camps, those loyal to Ali and those loyal to his local rivals, the Amrouche family:

In the early hours Hamza makes his own way back, shaken but uninjured. He had been neither beaten nor injured. He’d spent a night in a cell and he’d been let out twelve hours later with no explanation.
Back in the village Hamza tells the story of his detention over and over, slowly as if in the telling some sort of answer or clue would appear. Hamza insists that when they let him leave the barracks he was alone, he didn’t see anyone else. At first they tell him he was lucky, they congratulate him. But as time goes by, as the absence of the two men ….. they start to look at him with suspicion muttering if he made it back he must have talked. But of what?
The rumour spreads through the village and is then amplified by the Amrouche family.***

The pressure is then increased on the villagers when the FLN instruct the war veterans to refuse their pensions from the French government. Akli, a veteran from the first World War insists that he cannot accept this, a question of honour, otherwise he will have fought as a slave. When Akli is subsequently murdered by the FLN, Ali, who is full of angry at the death of his friend, is led to the barracks by the army captain but refuses to help him:

As they were leaving the barracks the interpreter, as if disappointed, said: you didn’t push him too hard… The officer looked at him with a mocking smile:
Why push? They saw him come in here, he spoke with me. He’ll soon understand that that’s enough to compromise him, and then he’ll help us.***

The army captain‘s cynical understanding of the situation is then confirmed as Ali, who is suspected after his visit to the barracks, comes to realise:

Nothing is sure, as long as we’re alive everything can be changed, but once we’re dead the story is set in stone and it’s he who does the killing that writes the story. Those killed by the FLN are traitors to the Algerian nation, and those killed by the army are traitors to France. Whatever had been their lives counts for nothing: death decides everything…the silence he had chosen that morning with the captain carries no weight because the FLN will decide for him that he is a traitor, if they decide to cut his throat from ear to ear. And all the honour he has shown will be washed away with the single movement of a blade designating him as a traitor.***

And so Ali and his family’s future is decided, he becomes a harki, as he and is family escape with many others as defeat becomes inevitable in 1962. And so begins a decade of wandering from one “temporary” refugee camp to another, an unwanted embarrassment in France, until they are settled in a small industrial town in Normandy.

This first part of the book is the story that is never passed down, Ali is too proud and speaks little or no French, his wife none at all, but what of Hamid? We follow Hamid’s life, an intelligent youth taught in French schools, and as so many other immigrant‘s children, the only one in the family or even the community that can communicate with the French administration. He is slowly choked by this life and leaves for Paris at eighteen, learning to silence his past as he has been taught, the very mention of the date they left Algeria is enough to tell the other Algerians that he is the son of a harki, a story illustrated after many nights drinking in a bar owned by a Kabyle:

One evening whilst praising the country of their birth, a little groggy from the beers he’d drunken, he naively answered, when asked that he’d arrived in France in ‘62.
His (the bar owner’s) smile disappeared at once.***

Hamid has always been silent on his past to both his wife and daughter. Algeria becomes a dream for some of the third generation, some of Naïma’s cousins but she has no real feeling for it, fifty years later none of the family has dared return, the following quote from the then President of Algeria illustrates the feelings:

“The conditions are not yet right for the visit of harkis, it needs to be said. It’s exactly the same as if you asked a member of the French resistance to take the hand of a collaborator.”
Abdulaziz Bouteflika, Algerian President
14th June 2000.***

The final part of the book studies Naïma, the same age as Alice Zeniter and after visiting Algeria for work and understanding that in the countryside feelings still run high for the harkis, the grandchildren are treated as guilty for their grandparents crimes that they do not even understand and, what is more, that her Algerian family suspects that after all this time she has come to claim the house.

Zeniter finishes with Elizabeth Bishop‘s poem, The Art Of losing of which two verses are quoted below:

The art of losing isn’t hard to master;
So many things seem filled with the intent
to be lost that their loss is no disaster.
………
I lost two cities, lovely ones. And, vaster,
some realms I owned, two rivers, a continent.
I miss them, but it wasn’t a disaster.***

First Published in French as “L’Art de perdre” in 2017 by Flammarion.*** My translation