Fishing is above all freedom. To cover miles looking for trout, drinking from springs, 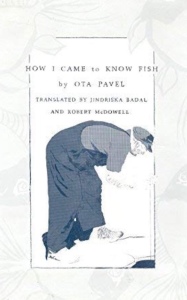 alone and free for at least an hour, a day, or even weeks or months at a time. Free from television, from radio, from civilisation.***

In this book read for the Roman de Rochefort prize, the author is the narrator, Ota Pavel tells us the story, through this book of more than twenty five chapters, each a short story, of his family’s life in central Europe in the early and mid twentieth century, a story of his father Leo Popper, a larger than life character, a non practising jew, who always had a way to make money, and if he had any he spent it, a real roller coaster of a life  and Ota’s long suffering  mother, a catholic. Leo’s passion in life was fishing and so he “invested” in a country house where they could go on holidays, this was then the beginning of their fishing life. Ota describes the man who taught them to fish, Prosek the poacher:

Prosek had a long, yellow bamboo rod, a whip without a spool. He would walk against the rushing water so that the fish could not see him and crack the whip as he styled his dragoon’s moustache. That is how his method got the name ‘crack-casting.’

His father is best understood in the chapter “In the service of Sweden”, where we learn that Leo, with no training can sell anything to anyone if he is motivated , after taking a shine to the Electrolux Czech bosses wife he becomes the best door to door salesman of fridges and vacuums in the country:

Dad sold four vacuums in Rokycany on the same day, which for a novice was quite an exploit because the people had been attached to their brooms and dust pans for hundreds of years, considering a vacuum at two thousand crowns as a devil’s invention and whatsmore, perfectly useless.***

Amongst the many stories, his father who owns a carp pond has it conviscated by the local mayor when the Nazi’s arrive because of the very technical question, is it possible for a jew to own a carp pond. Leo and his two older sons are sent to Auschwitz but Ota avoids this because he is too young and they had forgotten to have him circumcised. Throughout the war Ota, although young keeps them alive partly from poaching fish until both his father and two brothers against all odds return home after the war to the slow descent of Czechoslovakia during the communist period.

In all honesty to enjoy this book to its full it’s best to like fishing, where, as the opening quote tells us, fishing is about freedom.

The original quotes before translation