Aurel, with a quick glance at the group, sized them all up. With the exception of the African, all the others were Whites, over fifty, bulging stomachs, eyes glowing with alcohol. 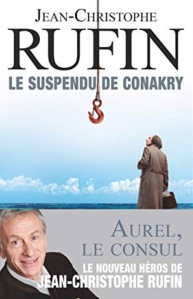 They were dressed in Hawaïen shirts unbuttoned down to the waist with either swimming trunks or shorts beneath. They mostly wore flip-flops or had slipped barefoot into old moccasins.***

Jean-Christophe Ruffin, member of the “Académie Française” and ex-French Ambassador from west Africa, winner of the “prix Goncourt” in 2001 tries his hand here with a murder mystery, making the journey from Goncourt to mystery in the opposite direction from Pierre Lemaitre, where his descriptions are as interesting as the mystery itself which opens early one morning with the discovery of a dead white body hanging from the top of the mast of one of the yachts anchored out in the small port of Conakry in the Republic of Guinea and with the arrival of the unlikely investigator Aurel Timescu of the French consular service described by his boss to the other members of the Conakry yacht club as:

A Romanian, imagine that, and the awful accent he speaks with. He’s such a walking catastrophe that I don’t know what to give him to do. I’ve relegated him to a cupboard. Literally. Without a telephone or a computer. You might well ask me why we keep him? It’s not as if we haven’t tried all of the tricks. All of his bosses have wanted to get rid of him, me included. But he’s a career civil servant, so there’s nothing one can do.***

Aurel the anti-hero is culturally at odds with the other ex-pats present in Conakry,as can be understood from his first visit to the yacht club to question the Europeans present about the dead man as he quickly sums them up illustrated in the opening quote. Aurel was brought up in the Romania of Ceaucescu and has thus developed a resilience the others could not begin to imagine, typified by his arrival at the port that morning:

It was midday when the chauffeur drew up at the entry to the marina where Aurel, a member of the French embassy’s consular service who, despite his small frame and thin limbs, needed to expend a great deal of energy to extract himself from the car. It was a two door Clio, the service’s smallest and most knocked about car, the only one his boss, the Consul General would allow him to use. Aurel acted as though it were a luxury sedan car, he tilted the passenger seat forward and lowered himself onto the rear seat, designed for a young child. He settled himself in with dignity, his knees tucked under his chin and his head wedged up against the roof. He descended from the car with the same air of importance, after all Severe was one of the titles of Roman emperors, as was Felix, incidentally. Aurel had never forgotten this lesson from history: dignity and happiness are sovereign attributes. Each one of us can seize upon them if he wishes. It was thus, with dignity and joy that the consul advanced towards the club-house, through the two rows of palm trees standing to honour him. ***

As the story unfolds and wrapped and ready solutions are proposed to him, concerning robbery, Aurel never loses from sight the key point for him, why would robbers come for the money and then take the time to hoist the dead body up the mast? As Aurel finally understands the intricacies of the situation his years under Ceausescu leave him with all of the necessary experience to extract a confession! Read in the Summer break.

First Published in French as “Summer” in 2018 by Flammarion.
*** my translation