You’re the hummingbird because, like a hummingbird , you put all of your energy into remaining still. 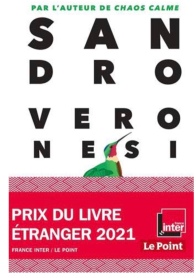 You manage to remain motionless in the world and in time, to stop the world and the time around you, and even sometimes to find the lost time. ***

I’ve been reading Sandro Veronesi’s books for a while now, since before my blog, but I have only  written on one previous book Terres Rares. So when his latest work arrived in tanslation in my lending library, well I could’t resist. What a well crafted book it turns out to be.

The narrator tells the story of the main protagonist, Marco, with each chapter representing a different moment in time as Marco’s life is slowly revealed to us and as we begin to understand why he is who he is. In a series of letters interspersed in the novel over several decades between Marco and Luisa, he living in Florence and she in Paris we slowly understand that their written relationship goes much further than their physical relationship, neither wanting to upend their lives and commit to each other, but why? Luisa at one point writes to Marco detailing why she thinks he is like a hummingbird , illustrated in the opening quote.

We are slowly taken through Marco’s traumatic life and incidentally, the point of combined trauma, his sister’s suicide, that explains the why of the beginnings of Marco and Luisa’s separation. But tragedies follow Marco and the relationship with the other members of his family from a young age through to the end of the book remain strained. Marco as a young adolescent is very small, his mother calls him the hummingbird because of this, and he undergoes a new and experimental hormone treatment in 1974, a cause of dispute between his parents, causing him to grow 16cm in 8 months, this in itself impacted his life and was a trauma. Then rapidly everyone except he leaves Florence, even leaves Italy. But where others would see despair, he sees hope, the only person remaining in Italy, his daughter dies in an accident leaving him as the only person to care for his grand-daughter, ‘The New Man’ who he lives for and brings up alone:

“There are those that fight all their lives, wanting to advance, to know, to conquer , to discover to progress only to realise that they were only looking for the vibration that brought them into the world: for these people the points of departure and arrival are the same. Then there are those who follow a long and adventurous trajectory  all the while remaining stationary because it is the world which slides beneath their feet and then they find themselves far from their point of departure: Marco Carrera was one of these.”.***

This is a marvelouslly poetic book, easily amongst the best of this year.