This book is the first of my 2016 German lit target.

This book written in 2007 begins with a peculiar kidnapping, the victim, Stransky, who lets himself be kidnapped, turns out to be the eighth of ten pawns in an elaborate game, organised by a neutral referee, between two teams with the the life of the pawn in play. The pawn is always a German who has worked in Athens. 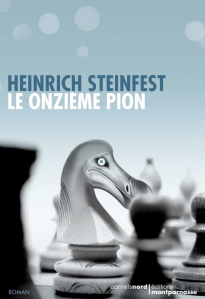 “A neutral referee, let’s say. Someone whose role consists of organising the kidnapping, without emotion but not without fantasy, and transporting the victim to his starting point….And then the referee withdraws leaving the man alone”***

one team tries to bring the man home whereas the opposing team tries to kill him. Police inspector Lili Steinbeck, when investigating Stransky’s mysterious disappearance, then finds herself confronted with this well oiled routine.

Steinfest’s dry humour is very particular, and most of the people presented in the story are caricatures, it could almost be a cartoon book story. Take for instance the French leader of the team trying to kill Stransky, summed up in the following quote

“…..Greenpeace’s best moments. We can safely say that Desprez publicly condemned these people : crusaders, but far too hypocritical to admit it, preferring to present themselves to the world as saviours. If the whales hadn’t existed they would have protected three legged tables. But whales, of course, were better. They couldn’t answer back, they couldn’t protest either against their own massacre or against the people, too bored to stay at home, that instrumentalised them. That was Deprez’s opinion, full of the latent hate of the French towards Greenpeace.”***

We are presented with two opposites, the very rich people who run the game, shaping the world to their wishes and the very direct Lilli Steinbeck illustrated by the following quote.

“I took in on myself to repatriate your colleague, M. Kallimachos. He is at present my house guest.
What? Of his own free will?
It could be said that to want to is to be able to. The opposite could also be said that when one can then one does not need to want to. There is then no longer a question of free will.
So you’ve kidnapped Kallimachos then?”***

Does Lilli Steinbeck save Stransky? Well you will just have to read the book (In German or French, not yet translated into English). Against my initial leanings I did finish the book and if you like a mix of fantasy and crime, you may become part of Heinrich Steinfest’s cult-like following. I on the other hand am glad I read this book but will probably not read any others.