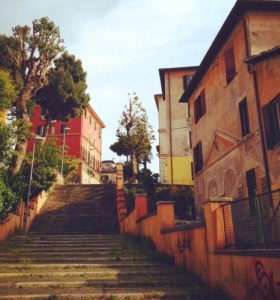 Onto Roma Enigma, – this book is set in the Garbatella, a Roman garden city  with distinctive architecture and affordable housing – enough of the explanations and on to the story!

The reader is in on the know of the enigma from the outset when a young student girl is shot dead at the local patisseria, no weapon is located, no credible suspect found and nothing in the victims life that would lead to an assassination. Inspectors Mariella De Luca and Silvia Di Santo are torn between a crime related to the date or to much older political murders or a crime with no motive ( but no of course not this is an enigma). Piersanti’s uses the story to study the culprits character, he is of course a sociopath drawn towards the dead student he didn’t know rather than the living, stopping at no limits to get to know more about her.

His one mistake was eating a cake, and this had nothing to do with weight watchers!

Did Mariella De Luca solve the Enigma? Well what do you think?

Exclusively for audiobook in the car and why not, I feel I would have wasted reading time otherwise.

There are seven other De Luca mysteries in the series! No! No! No! No! Well I never was a series reader.

First published in French Roma Enigma by Le Passage in 2010