The spirits are there now. My father is the one that comes the most often, he lies down beside me and touches my hand.
He’s there, carbonised. 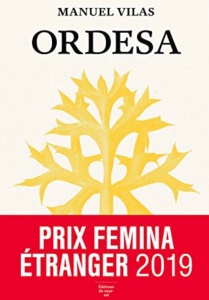 “My son, why did you have me burned?”
Me too, in the near future, I will be a dead father and I will be burnt. For Valdi and Bra I will be deceased too…..
I believe in the dead because they have loved me so much more than today’s living.***

The writer, Manuel Vilas, grieving at the losses of his mother and father wrote this multi-award winning book about his life and his grief. This is a bitter-sweet book but you may have to look for the sweet. Vilas gives each character in the book the name of a musician, first of all the living, his sons Valdi and Bra (Vivaldi and Brahms). Vilas is divorced and lives alone with a spare room for his sons who come to see him for the minimum time possible and who never use his spare room, who have no idea of his grief, he is haunted by his dead parents having been unable to afford a burial plot as illustrated in the opening quote.

Vilas takes us through his upbringing in Spain under Franco and the relative poverty of this era and slowly he re-visits all of the dead musicians of his life, everybody he knew from his childhood is dead, a period that eventually arrives for most of us, such as here with Monteverdi:

My mother’s brother is dead, my uncle Alberto Vidal passed away on the 11th march 2015 at the age of seventy three.
In this book I’ve refered to Alberto as Monteverdi….
we burried him there in Ponzano. I can’t go there, obviously. I never go to a burial. So I don’t know what his tomb or his alcove is like. I don’t know if there are flowers. I don’t know anything.***

Such is grief that there is no hope, this is a period of life which Vidal must live through. Much like his book for the reader! This book was a difficult read, easing up to something like peace towards the end.