Mathias Enard was a name at the back of my mind since he won the ‘Prix du Livre Inter’ in 2008, and so I borrowed this audio book without actually knowing more about it, and what a good choice! 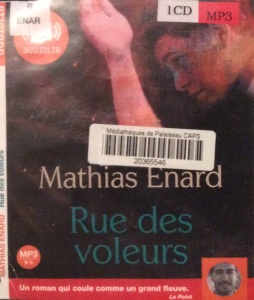 Mathias Enard has studied both Persian and Arabic and is professor of Arabic at the university of Barcelona where he lives.

The book follows the life of a young Moroccan named Lakhdar who is thrown out of his home, and wanders from perilous situation to perilous situation, always feeling imprisoned by his life, from beggar in Morocco to links with fundamentalism to living in the most lowest parts of Barcelona, ‘La Rue des Voleurs’. He becomes much more than just a Moroccan, more than just a Spaniard, he represents youth in general amongst the upheavals of the Arab Spring and the protests of the Indignant’s movement in Spain as East and West alike live upheavals. The book comes full circle to his past catching up with him and, for the first time, taking action rather than being pushed.

Mathias Enard draws a highly believable picture of both sides of the Mediterranean painting similarities in poverty and differences in culture, from the start we know the book is a tragedy, but with an unexpected climax.

I will go back and read his previous work ‘Zone’