And your conclusion?
Everything thats happening is coordinated by someone behind the scenes with one goal to completely ruin scientific research. 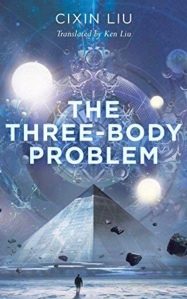 who?
I dont know, but I can sense the plan. A very comprehensive, intricate plan. damage scientific research installations, kill scientists, drive scientists like you crazy and make you commit suicide, but the main goal is to misdirect your thoughts until you’re even more foolish than ordinary people.

Something is seriously wrong, the worlds top theoretical physicists are commiting suicide and an unlikely duo are brought together, the applied physicist Wang Miao and the rough detective Shi Qiang as Wang Miao is persuaded to infiltrate a mysterious organisation, The Frontiers of Science. One day Wang Miao has a count down which only he can see appear before his eyes, beginning at 1200 hours and nothing he can do will make it disappear, Wang Miao becomes worried and goes to visit Shen Yufei, a member The Frontiers of Science who tells him if he gives up his research and directs his laboratory to work on another problem the count down will stop, he tries this for a few days and it does. Whilst at Shen Yufei’s apartment he notices that She and her Husband are playing a Computer game whose internet address he notes down. Shi Qiang an untypical policeman is brought in by the military to work on the problem of the suicides without being told of the background which he nevertheless begins to intuit as illustrated in the opening quote as he gets Wang Miao back on track.

What is the computer game that the members of the Frontiers of Science are playing owners Wang Miao, The Three Body Problem? the aim is to solve a problem in an imaginary world of a planet and two suns where a civilisation tries to develop but suffers near annihilation at irregular intervals which they cannot predict and which are linked to the movement of the three bodies. The civilisation only survives because they have evolved the capability to dehydrate when the suns come too close (a chaotic era) and to rehydrate again when all is safe. A computer game at many levels as at the end of each chaotic era the rehydrated civilisation, which evolves from era to era, tries to solve the three body problem in order to predict these chaotic eras using known eras and characters from our historical past.

This book is the beginning of a trilogy involving the Trisolariens whose world is about to come to a cataclysmic end and who have been seeking another world. At a secret Chinese deep space listening centre Ye Wenjie, an astrophysicist who had been sent out to this centre at the back of beyond decades earlier during the cultural revolution, emits a message about the Earth and then picks up a first ever message from outer space in return. Will she then reply knowing that with the direction of the message and the time between sending and receiving the Trisloariens would discover Earth.

Liu Cixin then introduces us to Superstring Theory as the Trisolariens propel a proton towards the Earth at the speed of light, a proton you will say can do no damage, Wrong! When unwrapped from up to 11 dimensions down to 2 dimensions it can contain information and commands and can wrap itself around the Earth. For more explanations try fiction unbound.

If you read Science fiction and haven’t yet read Liu Cixin, a nine times winner of the Chinese Galaxy Award and want to know How far do She Hang and Wang Miao get? Do they discover Ye Wenjie? Does anyone suspect what is behind the suicides? and can anything be done? Then get out there and buy it!