Grenzfall or ‘Borderline Case’ was Merle Kröger’s third crime book or to be more accurate a cross between a political thriller and a crime book, and is one of the books on my 2016 German lit targets 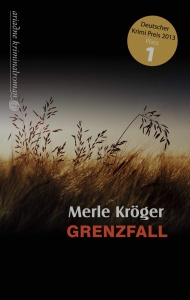 Grenzfall is set in two time periods, first of all in 1992, a key time in the European Union and in particular for Germany, which found itself in deep change. The rich West Germany had been reunited with the poorer East Germany and, with the expansion of the union found itself no longer at the eastern edge of Europe but in its centre with inefficient border controls in place between Poland and Germany. Europe was in its third year of mass migration after the ‘Wendung’ or change in direction.

The first section of the book, in a mirror to today’s events here in Europe, covers the previous major wave of asylum seekers flooding into Germany (and then on into other parts of Europe), in particularly with respect to the east of Germany where the ‘Wendung’ was not necessarily well managed, a relative increase in wealth accompanied by a loss of ambition to do anything.

‘Every Saturday it’s the same thing. Off to the disco, whoop it up, a belly full of drink and back onto the streets….Last week near Königswusterhausen they’d thrown a negro in the sea…….Why do they drink so much? Why do they fight? Why do they seem to have a death wish? They’ve got everything: Western money, colour television on every channel, freedom to travel.’***

Then against this tumultuous background, Merle Kröger singles out her characters to better feel the various currents at the time, Hajo the west German coming to the East German ‘colony’ on a shooting holiday

‘Hajo had shot the Big Five and not only with his Nikon.’***

Jahn, the jealous former East German policeman trying to survive in a poor and recently deserted part of Germany.

‘Anyone that shouts Asylum out loud can simply stay here. That’s how things are now here in the new Germany. You can leave, and in return you have to accept that everyone else can come in.’***

Also a Romanian Family, the Voinescus, Asylum seekers living in a shelter waiting for papers whilst the officials were unable to handle the flow.

‘hundreds of people waited everyday and the officials clocked of at four!’***

And lastly a Romanian illegal worker, Nicu Lăcătuş, a Romany whose situation can be best understood by a description concerning his friend Bogdan.

‘Bogdan knew what was wrong. Knew that the new boss had already fired all of the Romany people a week ago. Knew that Nicu had lost his job and that he would also lose his home.’***

Merle Kröger is at her best setting the political scene in this, the first, strongest part of the book which comes to an end with the central tragedy before the story moves on to the present day (2010).

The second part of the story handles the investigation of the previous tragedy in today’s Germany, whilst again setting the political scene, the rise of right wing politics against a permeable European border whilst covering the unchanged conditions in Romania for the Romanys.

‘See the men from the NPD (Nationaldemokratische Partei Deutschlands) over there? They’re no longer skinheads in bomber jackets and Dr Martens. Today they wear collars and ties. They open information centres in towns and villages.’

This is an excellent intrigue, well worth a translation, especially in light of her latest book with rave reviews ‘Havarie’ which I will try to cover later on in the year. If I had to find a weak point in the book it would be the relationship between the two investigators which was of less interest to me than the rest of this high quality thriller