Arnaud Cathrine has put together this marvelous book from a selection of amateur colour slides from the 1940’s through to the 1970’s chosen from Lee Shulman’s Anonymous Project www.anonymous-project.com, a large private collection of anonymous Kodachrome slides.

He has imagined a story linking these images and as the story moves on we don’t initially realise that the images of the recurring characters, the brothers Andrew and Ryan Tucker are never twice of the same persons. The story he tells us is a story of California from the 1940’s through to the 1980’s and of the different life trajectories of the two brothers.

The story is told in alternating chapters by the two brothers beginning with their fathers arrival in California just before the outbreak of the war and the meeting with their mother in Santa Monica. The marvelous images at every page of the book give us a full immersion into working class homes, which seem by today’s standards to be sparse. The two brothers take different roads as Andrew discovers his attraction to men, take this photo with his first boyfriend: 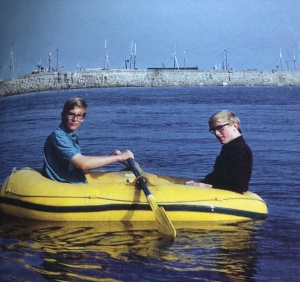 As things become more difficult at home Ryan advises him to move to San Francisco where he meets his life partner. Capturing the post war tensions, his father refuses to see him from then on, even to his death.

Ryan on the other hand meets his wife to be, shown in this photo titled by Arnaud Cathrine “Come near her and I’ll crush you”

An interesting way to give life to these 90 or so photos, as for instance their mother has a secret liaison with the neighbour who then dies in a car crash or their childhood friends move away and always these remarkable photos.