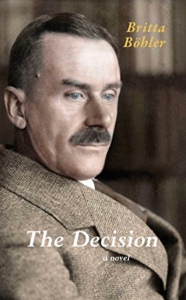 The eternal petty bourgeois mindset, kneeling to those above you, tramping on those beneath you. “Everyone should have someone above himself he is afraid of and someone below that is afraid of him.”***

This book by Britta Böhler, read for German lit month in French, concerns three days in 1936 between when the nobel prize winning author of The Buddenbrooks and The Magic Mountain, Thomas Mann had handed in a letter to be published stating clealy his opinions as a critical opponent of Nazi Germany and his agreement for it to be published. It examines what may have been going through his mind, the greatest German writer of his time , who abhorred the Nazi regime but who would have to sacrifice his German readership, the only ones he really wrote for.

At the end of February 1933. Thomas Mann, his wife Katia and his daughter Medi leave Germany for a three week holiday in the Swiss mountains, he couldn’t know that this trip was one way and that he was leaving Germany:

During this time in his fatherland the world collapsed. You leave in all innocence on holiday and, before you know it, you no longer have a fatherland. And that at dizzying speed.
The fire in the Reichstag, the dissolution of Parliament, Hindenburg speech. The first proclamation of the state of emergency, a decree to protect the people and the state, what could that mean, I ask you?….And the there were the March elections, and he regained hope. Hitler had got it wrong, the majority of Germans hadn’t voted for him. But soon, it appeared that it changed nothing. New emergency decrees followed, the Reichstag had been completely neutralised. In November there would be new elections, and Hitler celebrated his defeat as a victory.***

Thomas Mann is described as a patriarch who lives for writing and is unfit for anything else in real life, from the outset the Nazis attack him in the press and as he stays longer than he is supposed to in Switzerland, they confiscate is house in Munich. He examines his relationship with his brother, the writer Heinrich Mann, he describes as a lover of wine and women, thinking back to a recent visit he had payed him in the south of France. Heinrich was impulsive and decisive, when in the first world war Thomas had taken two years to write on the nobility of war, missing the change in heart of the people and being published late in the war, Heinrich had written aboutreplacing the regime by a republic. Thomas was also frustrated by his son, Klaus who he compares to Heinrich, Klaus who for his first issue of “Die Sammlung”, an antifascist review, in 1933 had published A scathing article by his uncle Heinrich.

As Thomas dithers during these three days, he is under pressure from his daughter Erika who cannot understand his not clearly coming out against Germany. As he tells Katia at the end of the three days:

“The letter will be published tomorrow”, he says.
“it’s really what you want?”
He folds his napkin, empties his glass. How can he explain to her that he has made the decision to lose his fatherland? Or more precisely that he is losing nothing, that they can’t take Germany from him?
He rises and kisses Katia on the cheek.
“Germany is to be found where I am”, he says, and heads for the phone.***

A rich journey into the past where, against his inner convictions, Thomas Mann decides that literature cannot live in isolation from politics.

One thought on “Britta Böhler “The Decision””