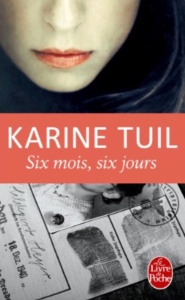 This book is then ostensibly born of a discussion between Fritz and a journalist.

This book is from my 2016 French lit targets

What is the relationship between the story teller and the story? Pretty quickly the reader becomes aware of the coldblooded obnoxiousness of Fritz, as he says whilst describing himself and his role:

‘Kant, at the time, was the director of BATKA, a company specialising in the manufacture of batteries and electrical … I was there as an advisor for a French industrialist who was fond of children and who had arranged to be payed, 4000 DM as well as a child younger than 15, for his presence. Does that shock you? Oh that’s not all I’ve seen during all those years with the Kant’s! Believe me, the Germans too know a bit about……’***

Fritz initially leads us into what appears at first impressions to be a relatively banal story of a powerful person being weakened up to losing their social position through attraction, both physical and emotionally, to a stranger, a sordid case of blackmail, the couple meeting in anonymous hotels where their sexual feats were secretly filmed. Or was this more complicated? Was there another reason behind this attack on the Billionaire German industrial leader of this old family business, Juliana Kant? And what do we the readers think of this story? As Fritz says:

‘It seems ridiculous to you doesn’t it? That a forty five year old married woman, mother of three children, having been awarded the ‘Federal Cross of Merit’, a woman with a fortune worth several billion euros famous not just in Germany, that such an image of female perfection should blow apart the cocoon in which she had lived for so many years for a story of sex, you have trouble believing it, you feel revulsion even….’***

So how does this end? Juliana Kant will not be blackmailed, reports her blackmailer to the police who is arrested, she is ready to accept the press onslaught and then all is over? No! Although some nuance remains, the blackmailer had another agenda, who is the Kant family and where does their wealth come from? Fritz once again:

‘You know the saying, every great fortune is built on a great crime?’***

Karine Tuile takes us back to the origin of this wealth in Nazi Germany with Juliana’s grandfather, Magda Goebbels’ first husband, and then it’s continuity after the war.

‘At the end of the war,  BATKA had large quantities of   Raw materials  and A great number of machines in working order…….. From the 22 mai 1945, the British authorised the factory to start back up its production . The company registered a turn over of more than a million Reichsmarks.’

The title of the book is the subject of a formidable  vengeance at the heart of the story. Is this just another story spun out of the war in Europe and the post war guilt or lack of it? No because this book is based loosely on the true story of  Susanne Klatten the heiress of the Altana and part of the BMW empires who to remain incognito, sometimes called herself Kant. And although her company is known to have used slave labour during the war, no apology has ever been made nor compensation ever payed.