In some ways it was true. There was nothing between them, 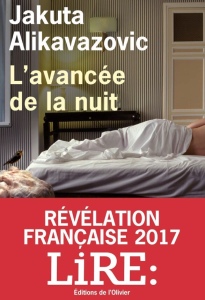 but then again it was false, once everything that takes place with time had taken place something unalterable remained.***

In this award winning book from 2018 read for the “Roman de Rochefort” prize, Alikavazovic studies opposites, how people at different ends of the spectrum can be attracted, attracted and at the same time repulsed (an attempt here at copying her writing style, affirming something and then it’s opposite in the same sentence, illustrated by the opening quote). The characters and the writing style reflect these opposites, opposites highlighted by their similarities. Take for example the main protagonists, Paul and Amélia, both orphans on their mothers sides, one rich, one poor, both architecture students, Paul  working as a night porter in a hotel, Amélia as a mysterious rich student  living in the hotel. They meet and live a fusional relationship:

Their architecture lecturer Albers is a specialist of cities and the night, a subject they see from opposite viewpoints, for her, night would represent a violence that would grow out of control, for him, night was a subject to be tamed, controlled. Albers turns out to have been a very close friend of Nadia, Amélia’s mother, who had left  Amélia as a baby and had gone to Sarajevo just before and during the siege, where she had disappeared. She was unable to go through with her life and ignore the unfolding tragedy, she had to feel it, she was an artist and needed to be involved. Albers on the other hand, a theorist, did not feel the need to become involved. Albers theorising the city in dislocation, Nadia living the destruction of the city. It would take Albers’ vision and understanding to see what was happening between Amélia and Paul:

It was obvious that they would be, one for the other, the perfect lover. And that a person with more experience, Albers or another, should have been able to feel something worrying, an almost mechanical inevitability of the pleasure which would sometimes, for both of them or at least for one of the two of them be a nightmare.***

Amélia leaves him abruptly one day and disappears for ten years, spending this time ostensibly looking for her mother in Sarajevo whilst actually looking for herself, discovering that after the destruction of the city, (and her mother), the people want to rebuild the city as it was, to forget the violence which she cannot. She marries a young Serb who under her influence becomes an artist fighting against the will of the people to forget the seige, the recent past, taking actions such as splashing the streets with red paint. Alikavazovic theorises:

When Amélia returns, Paul has become rich, as an architect he has become a specialist of …windows, and with her father’s help then sets up as a security specialist, in a way to protect against the night, selling amongst other things a thick walled safe people can hide in to escape danger. Once again seen from a certain perspective she living the essential, searching, feeling and yet back with no answers and he understanding the fear of the people in the city yet working at and living from the futile:

He never knew what the light was like, nor the strange dissociation that sets in between he who sees everything whilst experiencing nothing and he who experiences everything without doing anything, without being able to do anything, and are one and the same person.***

To finish my write up, they have a child, Amélia leaves soon after to go from war zone to war zone and a new cycle sets in as eventually their child leaves to seek out her mother. A difficult, hard, yet rewarding read.

The original quotes before translation