Mirko Bonné’s latest book ‘Nie Mehr Nacht’ has not yet been translated into either English or French, so I read slowly in German. What a wonderful book! Shorttlisted for the German Book Prize, the translation rites are still available. 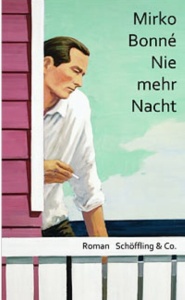 This book is about Markus and his sister Ira, who when young were afraid of the dark and as adults face the dark in two different ways, she ending it in suicide and he prolonging it in life. The story is in 4 parts, the first part follows Markus who is in despair following his sisters suicide, he asked by his oldest friend to make drawings of several bridges in Normandy that were of importance in the allies landing in 1944, he then goes on a road trip from Hamburg to Normandy with his sisters son Jesse, deeply wounded by his mothers disappearance, and where he tries to understand him and to break down his teenage withdrawal from the world. The second part involves his stay with Jesse’s friends family at the hotel l’Angleterre on the Normandy Coast, this lovely family become close to him as he realises that he just cannot draw these bridges and begins to withdraw into himself. The shock occurs as he sees a picture of what he takes to be his sister in a photo in a shop in Normandy. In the third part of the book as he cannot get Keats’s Ode to a Nightingale from his mind he begins to slowly dissapear giving away everything he owns and sinking in despair to the moment he inadvertently finds himself in exactly the same suicide situation as his sister had. She chose night, he chooses day, and in the fourth and final part of the book he is nursed back to life by the girl from the photo, as we learn the terrible secret haunting brother and sister for so long. This is a poetic book full of melancholy and finally of hope. I am glad to have discovered this writer whose previous book, The Ice Cold Heaven, has been translated into both French and English 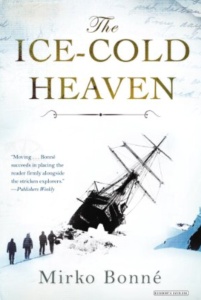 Fade far away, dissolve, and quite forget What thou among the leaves hast never known, The weariness, the fever, and the fret Here, where men sit and hear each other groan

First published in Germany in 2013 by Schöfling & co