LATE ON THE afternoon of Tuesday the ninth of April in the Year of Our Risen Lord 1468, 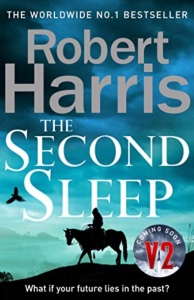 a solitary traveller was to be observed picking his way on horseback across the wild moorland of that ancient region of south-western England known since Saxon times as Wessex.

We’re of to Wessex in this Sunday Times #1 bestseller from Robert Harris, I should declare from the outset that had the initial idea, a “Planet of The Apes” moment, a voyage in a mediaeval world that we quickly come to know as our future, been developed in an original way then I would maybe have understood this enthusiasm, but no. **Spoiler Alert**, not that it spoils much! The people of the past were worried and fled before the apocalypse:

We regard our society as having reached a level of sophistication that renders it uniquely vulnerable to total collapse, key sectors and technologies could be affected to such an extent that our chances of finding our way back to the status quo ante could diminish alarming quickly.
Oh yes the ancients had had faith sure enough, their God had been science and it had deserted them.

There are so many thought provoking views of the future out there, including Armagedon moments. Seek and find one, this is not it.

First Published in English as “The Second Sleep” in 2019, by Hutchinson.

Site Title
viensdacheterunID3
Just got an ID3
a rambling collective