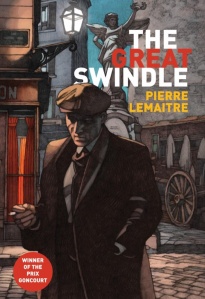 Pierre Lemaitre has seven crime thrillers of renown published here in France of which his early trilogy based on the detective Camille Verhoeven, which are already translated into English by Frank Wynne and published by MacLehose Press

I read parts of the book and listened to the whole audio book , which is written in such a way as to suggest an oral story with the narrator cutting in from time to time to give comments, pushing Lemaitre to read the audiobook himself.

‘Au revoir là-haut’ was published at the end of 2013 and coincides with the centenary of the first world war. The book covers the end of the trench warfare and deals with:

-The feeling of the French soldiers, “Those that thought the war would be over soon are all long dead. Killed by the war. So Albert was pretty sceptical when rumours of an armistice started circulating in October. He took no more notice than he had of the initial propaganda which explained, for instance, that the German bullets were so soft that they just squashed up against their uniforms like over ripe pears, causing great laughter amongst the ranks. In the last four years Albert had seen a stack of soldiers laugh themselves to death after being hit by a German bullet.”***

-The mixing of the well to do upper classes with the poor working classes (officers and soldiers), “The officer stared at him, gave a sigh of discouragement and slapped him in the face. Albert instinctively protected himself. Pradelle smiled a wide smile that said it all… When he pronounced his name, Maillard, he insisted on his unpleasant way of pronouncing the last syllable making it sound worthless, full of scorn as if Maillard meant dog shit or something of the like.”***

-The severely facially disfigured soldiers seen for the first time in warfare (‘les gueules cassées’ in French) and the use of drugs such as morphine and heroin at the time during the war for injuries and on the black market post war.

-Then finally two enormous swindles one of which according to Lemaitre is based on a true story, up to you to guess which one of the two.

The three main protagonists are linked by dramatic events which take place in the last days of the war contrasting utter self interest in one character to pure altruism in the second character, both stemming from wealthy backgrounds. The third character from a working class background becomes a pawn in the future of these two eventual swindlers, taking an active part in one of the schemes.

Two of the most remarkable sights during a visit to France for anyone interested in the First World War are the huge military cemeteries spread over a large part of North Eastern France and the various war memorials to be found in every town or village in France, the least generous of which that I have seen and is referenced in the book is of a cockerel standing on and scratching a German army helmet. These two sights are the subject matter for the swindles.

The last one hundred years has caused such change in social relationships that, realising this is a thoroughly believable set of situations, I, whose life has spanned more than half of this time, still need to ask is it possible people related to each other in such a way?

The Great Swindle: First published in French by Albin Michel as ‘Au revoir la-haut’ in 2013
Translated into English by Frank Wynne and to be published by MacLehose Press in November 2015
***Book read in French, my translation with excuses to Frank Wynne