Sites to visit linked to this proud event unfortunately now cancelled.
Emma, Marina-Sofia and the official event site Quai des Polars In order to support this event, hopefully I’ll manage to write articles on all six of the short listed thrillers and propose my winner before the official announce on the 4th of April.

In order to reach the largest readership possible for this attempt, I have created a website to publish my six articles and to propose my winner ****in French*** please go to my French website and don’t hesitate to make it viral 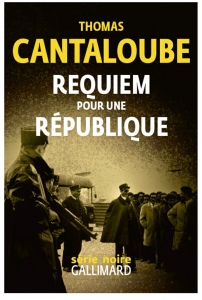 Thomas Cantaloube has set this story in the shameful years at the start of France’s Vth republic, The real life shady characters that had been part of Vichy’s pro-nazi government and had avoided the post-war purification in large numbers had been in positions of power since the war and still were in these 1959 to 1961 years in France, represented here by Maurice Papon who as secretary general for the police in Bordeaux during the war had been responsible for the deportation of more than 1600 Jews and was later found guilty of crimes against humanity in 1998. Here as in real life he was in charge of the Paris police with his fictional deputy Jean-Paul Deogratias. The story is told through the converging lives of three characters, a young policeman, Luc Blanchard, an ex-maquisard and small time criminal Antoine Carrega and finally Sirius Volkstrom, French but of partly German ancestry who had made money under the nazis and was now a payed killer:

The paths of Deogratias and Volkstrom had crossed in Nîmes in the autumn of 1940. The first was an unknown paper pusher at the Gard Préfecture, under the orders of one of the most zealous officers of Vichy, the prefect, Angelo Chiappe. Within a few months he had made himself indespensable to the representative of Pétain’s government. He quickly became his right hand responsible for intelligence, raids and deportations….A zeal that he later put to use for other officers of the French state and then for the republic, passing like many others, between the wires of the purification sieve.***

The period had three main tensions, the Algerian war of independance, fought mostly in Algeria but with activity in France organised by the FLN, France which already had a large number of Algerians working in the factories. Any idea of action in Paris was violently surpressed by the Paris Police. The second tension was due to De Gaulle having decided to pull out of Algeria and the attempted putsch by senior generals followed by the more than 2000 killed by the right wing organisation the OAS (l’Organisation de l’Armée secrète) who were against leaving Algeria. The third tension was around the fact that France was testing it’s new atomic bomb in the Algerian desert. (for the anecdote, and part of the story, the fourth and last bomb in the series, Gerboise verte, was exploded hurriedly to avoid it coming into the generals’ hands). Cantaloube captures the moment in this book with everyday events such as rounding up arabs, possibly involved in crimes but with no evidence:

— And you Malek, you know why you’re here? — No sir, the policemen didn’t tell us. — Are you two taking the piss! Blanchard had changed to his “booming voice”, the one his more experienced colleagues had advised him to use when he was questioning Arabs: You’ll see, as soon as you raise your voice and sound annoyed, they’ll tell you everything.***

And finally without going into any details on the specific crimes in the book, the following comments by Deogratias set the scene for this book which can be read as much for the period where many of the events are true as for the well put together story itself:

as far as the police go, we dont risk anything, everything’s good. From the press side, we’re probably ok, we’ll break a few fingers if we have to. The unions and the commies are the problem but their boys, when it comes down to it, they couldn’t care less about the Arabs. On the other hand what worries us , are the judges and lawyers. De Gaulle wants to play it by the rules, we’re a republic, we respect the laws and all that. So, we’re going to have to work a little on the fringes.***

First Published in French as “Requiem pour une République” in 2019 by Gallimard.
*** My translation