We should have neutralised Pasternak for good. Back in the good old days….the valiant Tcheka…the NKVD….I don’t 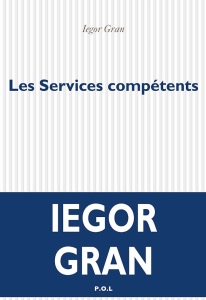 understand why we put up with it.
What a dumb fool he is!
We have to be tactically astute, declares Pakhomov. We can’t just go in all guns blazing when the eyes of the world opinion are on you……the international interest of the foreign media have created an invisible protective dome around Pasternak.***

Iegor Gran takes us back in time to Moscow in the 1960’s and illustrates this schitzophrenic period by the true story of his parents and the five year hunt for his father by the eigth section of the KGB, responsible for anti-soviet propaganda.

This is a time, following Krouschev’s recognition of Stalin’s crimes, where we follow the life of lieutnant Evgueni Feodorovitch Ivanov as he tries to find out who is hiding behind the name of Adrien Tertz, a jewish name, and is publishing in the West, first in French and then in Russian. His writings criticising the Soviets are too precise and could only come from within the USSR. Tertz begins by quoting the union of Soviet writers:

Socialist realism is the fundamental method in soviet literature and in soviet literary criticism. It requires of the artist a true historically tangible representation of reality in its revolutionary development. Amongst other things it should contribute to the ideological transformation and of the education of workers in the spirit of socialism.***

Siniavski and the French diplomat that helps him get his works out of the USSR laid down at the beginning, the strategy that allowed him to write for so many years, a Jewish name, hints of links with both Poland and Lenningrad that had Ivanov well off track in his hunt.

The main choice of Iegor Gran to reverse the vision and to write the story not from his father’s point of view but from Ivanov’s liberates the author to show the contradictions from within, for instance Gagarin’s first space flight and his hero’s welcome contrasting with his reward being a state secret, if the West were to get their hands on the clothing list he was granted as a hero, they would understand the state of things for the Soviet Peoples, as Gran points out the list was signed in person by Krouschev:

As Ivanov laments, if only they could have found Adrien Tertz quickly, the Soviet Union was in a state of constant flux following the death of Stalin, each change affecting the resources and morale of the KGB, Krouschev denounces Stalins crimes, Stalin’s body is removed from the mausoleum he shared with Lenin and buried secretly, Krouschev is “retired” and throughout all of this the eigth section is unable to find Tertz. Meanwhile Siniavski knows he will be caught, sometime, he just doesn’t know when as months turn into years.

Iegor Gran then through his narrator tells us of the french and Italian, communist parties, the hope of whose victories kept the KGB hardliners in check, of the Nobel literature prize for Pasternack for the Dr. Zhivago that was forbidden in the USSR, as illustrated in the opening quote, of the eigth section often finding illegal copies on raids of the intelligentsia.

I particularly liked the raid on Siniavski’s house when his mother after years of preparation was more than a match for the officers, telling them when they revealed that her husband was in the Lubyanka of her relief to find out that he wasn’t with another woman. And of course when she quickly places her young baby, Iegor Gran, in Ivanov’s hands before he could avoid it.

He gives a sense of the time in history to the story and brings Ivanov to life as a complex character. Their very hunt for Tertz and his imprisonment bring the light of the western media on an otherwise little read author. This is an engaging book that will do well and would deserve a translation.

First Published in French as “Les services conpétents” by P.O.L in 2020
*** my translation

The quote as read in French before translation