As Mentioned in a previous post, this year’s Booker prize, with considerable help from Corona will only be discerned on the 19th of November. As promised I have now read and posted on all six books on the shortlist!!! 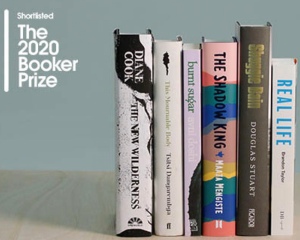 So with one week to go before the jury gives its verdict, in all humility, here is a quick run down/comparison of the books and my predicted winner.

Wallace, a black research assistant in an all white environment is psychologically damaged by his upbringing and his parents and struggles a losing battle to be recognised for what he aspires to be, and to recognise himself in this white America.

As for all of the books on the short list this includes inter generational relationships, here in the foreground as Shuggie’s mum destroys herself, her family and the young Shuggie through the drink. If your looking for hope, this is not the book for you! The reader feels as if he is there, standing in the disaster zone. You could imagine this filmed by Ken Loach.

Another inter generational book, and to mind the most successful studies the conflicting stories of Antara and her mother Tara, in the past and as Tara becomes dependant and slowly loses her memory. Or is it Tara?

One of the other common themes to certain of the books is women fighting, here we see Zimbabwean women years after certain of them had fought in the wars of independance and Tambu’s struggle with herself, these ex-fighting women, the younger generation and her mother. An eye-opener to the role of African women in the fight fight for indepedance and its aftermath.

The story of Hirut and the war against the Italian fascist invaders in ’36. The poor in Ethiopia were poor and the rich priveledged as Hirut is raped by her employer/resistance army leader, because he can and because he knows he will die in the war leaving no decendance. Raped as her mother before her but finding some redemption and also revenge in her and other womens roles in the fight against the invader.

And the winner is : Maaza Mengiste, The Shadow King

I do hope the official Jury gets the right answer !