‘The entire linguistic topography of threats and intimidation encapsulated in expressions—preceded by silences, gestures, and looks—that people had to take in stride, 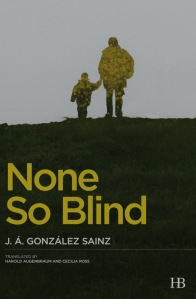 as if living with threats were just as completely normal as the idea that there might be rain one day instead of sun.’

This 2010 novel from González Sainz about Felipe Díaz Carrión and his family’s move to the Spanish Basque country is, in this time of Islamic Terrorism, full of actuality. How can your own family become radicalised around you? The title of course gives away some of the writer’s thoughts. This book was read for the Spanish lit month 2016. González Sainz sets the scene early on of the economic migration behind the story:

It was a time when many young people and even some not-so-young people emigrated from the area to large cities and industrial zones, to Barcelona or Madrid, to Zaragoza or the industrial towns and centers in the north, and that’s just the ones who didn’t cross the Pyrenees or even the Atlantic. Those cities and regions seemed to have made off with all the wealth and activity in the country, with all the advantages and incentives, and more than anything else, they seemed to hold an absolute monopoly on the future.

Felipe Díaz Carrión and his family then move into an industrial town, which seems only to exist for the particular industry, lumping together the workers and their families into cheap identical apartment blocks where we live Felipe’s difficulty to integrate, epitomised by his habit of walking, originally in the beautiful countryside but now in his new industrially oppressive landscape, whenever he is troubled. And of course living grouped together in such a way radicalises the society and put’s pressure on the weak as well as those with no roots looking for acceptance.

Felipe and his younger son, the only one in his family born in the industrial town, live through the gradual radicalisation of the eldest son and of Felipe’s wife, without seeing or wanting to see what is happening around them, despite the comments of the people around them to Felipe:

“You just don’t get it, Felipe,” they said to him again as they watched him stare unblinkingly at the photo of his wife on the page of a newspaper he now bought himself. “You know it, but you don’t want to admit it.”

After the tragic events and hate thrown up in the novel, Felipe, after his retirement, moves back to the old farm, where of course life has moved on, only his memories have remained stationary. We then learn that the violence we have witnessed in the industrial town had of course always existed and that Felipe’s father himself had been killed in such a bout of violence, with different words to describe the group’s involved and understand to an extent Felipe’s understanding and need to avoid violence. But I do not think, and I guess this is the author’s point, that we understand his blindness to what is happening around him and what could he or should he have done.

In current circumstances this is a thought provoking read.