Melchior: Madame Knorr is not just another hausfrau. Fashion is her middle name
Zangler: More or Less. Knorr Fashion House. I think I see what you mean….The Imperial Gardens Cafè is a fashionable place, is it? 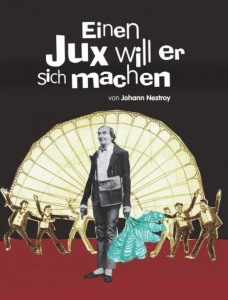 Melchior: It’s the only place for the quality at the moment.
Zangler: The quality…Are you sure it is quite refined?
Melchior: Refined?! The ploughman’s lunch is six oysters and a crème de menthe frappé.

I read Tom Stoppard adaptation of Johann Nestroy’s ‘Einen Jux will er sich machen’ for German lit month VI, and learned in the process that a previous adaptation, Thornton Wilder’s ‘The Matchmaker’ existed which itself was adapted to make ‘Hello Dolly’. Stoppard’s comedy ‘On The Razzle’, which I saw on stage back in the early 80’s, has kept the Viennese setting.

The first act of this two act play sets up the three situations that will be exploited in the second act of this play with the pompous country grocery shop owner Zangler and his quick witted servant Melchior at the centre of the action with, as the opening quote illustrates, Zangler due to go up to Vienna to meet his possible future wife, Madame Knorr.  The first antagonising situation is that of Zangler’s ward Marie whom he attempts to keep apart from her suitor, Sonders. An example of the double entendres around this situation is given as they think they have been discovered by Zangler (a case of mistaken identity):

Marie: Oh my uncle!
Sonders: Oh my God–Herr Zangler!
Marie: Don’t be angry, dear Uncle, I meant no harm
Sonders : She’s blameless, sir, intact I swear, I mean in fact I swear she did it against her will
Marie : I didn’t do it
Sonders : No she didn’t –I haven’t– Oh, sir, it was love that drove us to deceive you!

The third situation is that of the two employees of Zangler, Weinberl and Christopher (who incidentally was played by Felicity Kendal in the opening production) who, deciding to go on the razzle, shut up shop in Zangler’s absence and head for the big city in order to get a ‘past’ before it’s too late, as they see Zangler approaching they hide in a shop Knorr Fashion House where Weinberl pretends to be a Mr Fischer, unfortunately for him the widow Fischer is in the shop but she plays along with his subterfuge.

Mme Knorr : …It is such an honour to meet you. I think it is so romantic–you must have swept her off her feet. Tell me, how long have you known each other?
Mrs Fischer : Not long at all
Weinberl : No, not long.
Mme Knorr : You must have been married with your head in a whirl!
Mrs Fischer : You couldn’t say I went into it with my eyes open
Mme Knorr : Of course you did, and I am sure you have not been disappointed.
Mrs Fischer : Surprised more than disappointed. My husband has a very individual way of dealing with the banalities of ordinary time–I expect we’ll be engaged next week and exchange cards the week after.
Mme Knorr : Isn’t she priceless
Weinberl : I expect you think I’m rather presumptuous.
Mrs Fischer : No, I wouldn’t say you were presumptuous. Presumption one has encountered before.

The act ends as we learn that Zangler and Madame Knorr, Marie and Sonders as well as Weinberl and Mrs Fischer all are to be at The Imperial Gardens Café at the same time. In the second act there are more misunderstandings than you can point a stick at before as in always in comedy, all ends happily. Should you get a chance to see this play you will spend a fine evening and leave the theatre smiling.

5 thoughts on “Tom Stoppard ‘On The Razzle’”