This is a novel in nine stories and as Leo, a famous author says “Stories within stories within stories. You never  know where one ends and the the next starts! To tell the truth they all blend together, they’re only ever really separated in books”.*** 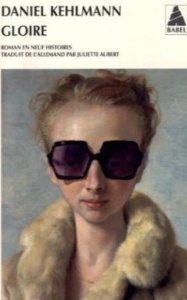 Kehlmann strings together for us nine seemingly weakly intertwined novels, using varying writing styles, I thought I recognised a similarity to The Book Of Dave in chapter 7.

The link between the chapters seems to me to be role play and disappearance:

From the man whose telephone number is given to someone else and who thus effectively disappears, to the man later in the book who has the responsibility for editing new phone numbers and who, caught up in relationships with two different women, asks himself “If I was mad?….in which labyrinth I was lost? I’d advanced step by step, none of them seemed large or difficult, but without realising it I’d advanced so far that I could no longer see the way out…..but during the daytime, when I got up and took on each of my roles as if they were the only one, everything seemed to me once again to be easy and almost normal”***

From the woman writer who replaces Leo on a book tour in an eastern country and who was not expected, (she wasn’t Leo) and who steadily disappears, to the writer of this book who appears in a veiled manner taking on roles in the book and who eventually disappears.

I enjoyed this book and was not tempted to pause between the distinct chapters.