In my blip of higher education, I had time to take Intro to Philosophy and learn about the panopticon, the hypothetical prison Jeremy Bentham came up with, where there would be one itty-bitty guardhouse at the center of a giant ring of cells. 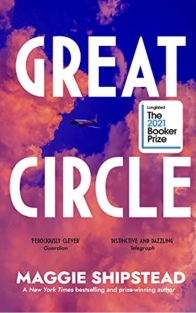 One guard was all you needed because he might be watching at any time, and the idea of being watched matters way more than actually being watched. Then Foucault turned the whole thing into a metaphor about how all you need to discipline and dominate a person or a population is to make them think it’s possible they’re being watched. You could tell the professor wanted us all to think the panopticon was scary and awful, but later, after Archangel made me way too famous, I wanted to take Katie McGee’s preposterous time machine back to that lecture hall and ask him to consider the opposite. Like instead of one guard in the middle, you’re in the middle, and thousands, maybe millions, of guards are watching you—or might be—all the time, no matter where you go.

This is a story about two timelines and two women with a number of things in common, of Marion Graves, the aviator, who dissapeared in 1950 during a round the world attempt passing by both poles and of the actrice chosen to play her role for a film of Marian’s life, Hadley Baxter. Hadley’s parents died in an aircrash when she was young and she was brought up by a Holywood uncle who between drinks and drugs had her taken to a number of castings from which she eventually becomes the young woman epitomised in the opening quote.
Hadley had read the lost logbook of marian in the library:

The lost log book of Marian Graves… It made a big impression on me when I was a kid orphan solidarity you know, team raised by uncles, i thought it would be full of hidden messages like tarot cards….
It’s the perfect sort of book for that isn’t it mostly cryptic bits and pieces what did it tell you? nothing…..really I’m most intrigued by the question of whether or not she intended it to be read at all. I think the fact that she left it behind at least meant that she couldn’t bear to destroy it.

Marian’s life is however the centre point of the book, from surviving a mysterious ship sinking on the atlantic with her twin brother Jamie during the first world war to being brought up, or left to bring herself up by a gambling and drinking uncle who was also a semi renowned painter in Missoula an out of the way town in Missouri where she made and kept, throughout her entire life, her childhood friend Caleb. How did she become an aviator? Well she passed by many steps, marrying a jealous bootlegger and then flying for him before changing her name and going into hiding to escape him:

He’s my friend, Marian said he’s always been my friend am I not allowed to have friends? Her voice rose, do you want me to be completely alone except for you? He sat down heavily the anger going out of him yes he said if I’m being honest
You want to know what we did we talked she gathered herself said as though making an accusation i told Caleb I loved you he looked up, you did when did you start having me followed say it again tell me what you told him he was radiating thrilled pleasure, she felt only hopelessness not now tell me you love me Louder she said When did you start having me followed when you flew to Vancouver only because I was so afraid of losing you…it was for your protection.

Marian becomes an aircraft ferry pilot during the second world war in England before the events around that ship sinking as she was an infant catches up with her. The question Hadley then asks herself and eventually solves is whether Marian really resembles the Marian in the film.

If the prize were to go to a traditional “story” then this book would be an excellent candidate.

First Published in english as “Great Circle” in 2021, by Doubleday