Giaconda Belli’s book expands on the mythology of the garden of Eden and mankind’s expulsion recentered from a female viewpoint, starting with the title from Blake’s Auguries of Innocence, feminised in the English translation 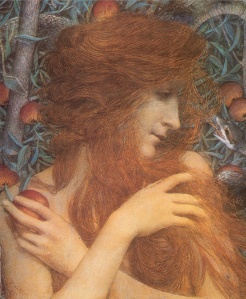 To see a world in a grain of sand And a heaven in a wild flower, Hold infinity in the palm of your hand And eternity in an hour. Belli chooses not to attack the myth itself:- expelling and replacing the warm, providing female earth gods of fertility, harvest etc by the haughty, removed, unforgiving male air god. But instead to revisit the myth changing the view of Eve from that of the week partner being easily tricked and ensuring mankind was ejected from paradise to the strong partner making the necessary decisions Adam was too afraid to make: Clearly it is inconceivable that Adam and Eve could avoid being forced out of the garden of Eden since humans have free will and this will always confront blind obedience. She paints Adam as fickle, Adam chose not to comprehend. It was easier to blame her than the Other who never allowed himself to be seen.
Belli’s novel treats duality, He (Adam) saw the Serpent. “It’s you. I recognize you….. You know him (Elokim) very well.”
“We have been together for a long time. As long as he exists, I will exist, too.”
“You exist to contradict him.”
“Without me he would find eternity intolerable. I provide him with surprises, the unpredictable.
This is not a book about creationism and an all powerful God ruling over us, as the serpent says to Eve
“Are you saying that we will create Good and Evil on our own?”
“There’s no one else. You are alone.”
“And Elokim?”
“He will remember you from time to time, but what he forgets is as vast as what he remembers.”
“We are alone.”
“The day you accept that, you will be truly free. And now I must go.”

The first half of the book dealing with the Garden of Eden myth kept my attention, the second half dealing with Cain, Abel and their twin sisters I found rather tedious.