-I wanted to create order. I thought I could find some constant values. Over the course of fifteen winters, I have caught immaculate snowflake hexagons and put them in a polyvinyl ethylene solution and…..took pictures of them…..And then I counted for ninety six seconds that, 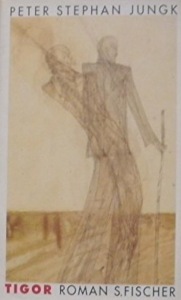 according to Tigor’s constant, yes gentlemen, to my constant, needed to elapse before an identical hexagon would appear  on an area of maximally ten square centimetres……But what happened? I was forced to see that what will prevail is chaos. Isomorphism, yes, constants, no. Fractal geometry, yes, Euclidian geometry, no

Peter Stéphan Jungk’s Snowflake Constant, read for German lit month VI, présents two sides to an age old philosophical contrast between determinism and free will, here represented on a first level as the contrast between Tigor’s work to date on his Constant which we learn initially is a representation of Euclidian geometry as opposed to Chaos theory. As the book opens Tigor arrives back in Trieste in a sorry state, we learn that he had uncharacteristically fled from a conference in Trieste his home town when he realised that his life’s work on this constant was wasted and he had taken off into an ancient forest to try to live from the fruits of the forest, a re-birth of sorts, and nearly starving to death in a short time period.

On a second level we learn that throughout his life his decisions had been those of others, he had only taken up the work on his constant because asked to take over his professor’s work, his life had been determined, and his flight to the forest was his first act of free will. A chance meeting with a taxi driver named Khoy later in the book who had during the years of terror in Cambodia actually survived a number of years in a forest, tells us how poor was his first attempt at free will. Tigor then in attempting to make decions for  himself repeatedly oscillates between the two positions.

After living and working in the Odeon theatre in Paris, of his own choice, and as he is to leave for Moscow, he changes his flight plans at the last minute and then is witness to a street accident. In his thoughts he is then drawn, once again, back to a deterministic view of events:

-He felt in some way responsible, that he had started the chain of events that had culminated in the accident. If he had been on the Moscow plane that morning, as had been his original intention, then Tigor believed everything subsequently would have transpired differently. Every individual was like a thread in the complicated weave of reality…….As he saw it, the consequences of the mild displacement he had caused had gone out, like echo waves to the periphery, and then bounced back to their starting point. The motorcyclist, if Tigor had indeed left as planned, would have reached the Place Claudel a split second sooner or later.

He leaves Paris when, after a dream, the doctor Chabanian persuades him that this dream was of Yerevan and that he therefore must visit it, where then he, an atheist, becomes linked with a group of creationists, the ultimate determinists, whose arguments explain the ridiculousness of evolution:

-so the little fish noticed, according to you believers in evolution, that there wasn’t all that much interesting food for him in the water. He spent the next two to four million years converting his fins into little feet. Then, because he wanted to eat still more, and also be better protected, he needed wings to get up into the treetops. So what did he do? He waited another five million years for his little feet to turn into fluffy colourful feathers. And a few million years later the wings had turned into a giraffe.

Tigor’s ultimate voyage, sent by the creationist Armenians in Yerevan, is to the deserted Mount Ararat, holy but inaccessible for the Armenians in neighbouring Turkey, to search for the remains of Noah’s Ark only to find that Mount Ararat is not deserted, quite the contrary there are large numbers of tourists who climb this mountain.

This is a rich novel which would yield more on re-reading.

One thought on “Peter Stephan Jungk ‘The Snowflake Constant’”