Michael Köhlmeier artfully mixes fact and fiction in this comparative life of Churchill and Chaplin, tying them together by their dark secret, depression. 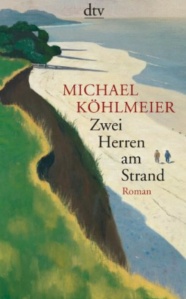 Two Gentlemen on the Beach is my last post for the fifth German Literature Month hosted by Caroline and Lizzy.

“they shared Nietzche’s opinion that the very idea of suicide was a strong comforter which helped them over many a difficult night”.***

Chaplin explains during this walk that

Churchill in turn explains that when Samuel Johnson described his own illness which he called the Black Dog, Churchill recognised himself in the description. There and then they agree that wherever they are or whenever they are called they will hurry to the other to save him from the Black Dog. So begins the book.

Köhlmeier uses the correspondence between the narrators father and William Knott a “« very private Private Secretary to a very prime Prime Minister » ” as his source of material for the book. The narrators father had met Chaplin as a child when Chaplin had visited his town’s school for clowns and later wondered if the man accompanying him for the visit was not Churchill who had been in Germany on a family holiday at the time.

The story takes us through key events for each of the protagonists at the time leading to meetings in L.A., New York, London and Biarritz, events such as the first talking movie and Churchill’s being run over in New York. The story naturally funnels towards the war years with an initial discovery

“Chaplin relates that an English statesman had told him that at the beginning of the 1930’s, a friend of Hitler’s had told him that Hitler had been tempted to commit suicide when he was six years old. Chaplin then answered his friend – I quote : “Winston, unfortunately we can’t choose the members of our club.””***

Both Churchill and Chaplin had to struggle to be able to fight against Hitler with their respective arms,

“Charlie playing two roles, that was the idea of genius behind the film –Charlie as the ridiculous dictator and, at the same time, as the Jewish barber, that was the blow dealt to the monster. One man hit back as hard, but not with the weapons of a clown: Winston Churchill.”***

Finally we learn the true role of William Knott, but I will leave that to you!

I discovered a recommendation for this book in the French magazine Lire’s October edition which has the book’s humour as caustic , a stinging turn of phrase, and less than 200 pages of small mindedness as well as …. repeated misfortunes for dromedaries. Well I had to try this one! 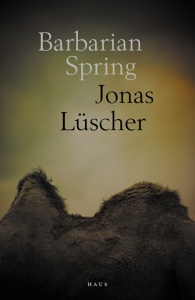 We discover the main protagonist, Preising who tells his story in an interview. After he inherits his company in dire straits, ‘Preising’s father, who put off dying just long enough for his son to complete the Business Studies degree he’d interrupted by spending eighteen months at a private Parisian singing school, bequeathed Preising his TV-aerial factory with 35 employees at a time when cable television had already gained a firm foothold.’ more by luck than by skill he hires a young engineer that turns his company into a success and keeps Preising as a figurehead with no real power.

Half a decade after the banking crisis and a couple of years after the Arab Spring Preising finds himself on a business trip to his suppliers in Tunisia where he is installed in one of their themed hotels in the desert ‘THE THOUSAND AND ONE NIGHTS RESORT in the oasis at Tschub was modelled on a nomadic Berber settlement –or, to be more precise, on what market researchers thought a first-class tourist to Tunisia might imagine when he pictured a typical Berber settlement.’ The Hotel is filled with a large wedding party of derivative traders from the City. Here we have the ingredients for a fine tale.

To avoid spoilers my description stops here, but the story reminds me a little of Tom Sharp although I did not laugh out loud as I did with ‘Wilt’, but maybe I’m just 40 years older now.

First published in German as ‘Frühling der Barbaren’ by Verlag CH Beck in 2013.
Translated into English by Peter Lewis and published by Haus Publishing as ‘Barbarian Spring’ in 2014