Booker International Prize 2020: 6 Books shortlisted for this prize.
“The Discomfort of Evening”: In order of reading book number 5.

It hasn’t occurred to me before that Mum and Dad couldn’t only be overcome by death but they could beat death to it. 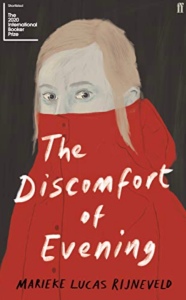 That you could plan the Day of Judgement just like a birthday party.

Jas, the narrator is, like Marieke Lucas Rijneveld, brought up in a Dutch Reform family in a Reform community, cut off from the rest of the world, “the other side”, the upbringing is strict in a religious sense and feelings are not shown or talked about, the family is poor and fights to just subsist. But Jas is brought up with her brothers Obbe and Matthies and her sister Hanna on a dairy farm with more than one hundred head of cattle and with country folk’s natural understanding of reproduction. At the outset of the book the initial tragedy takes place as Matthies takes part in a local skating competition where the winner “got a plate of stewed udders with mustard and a gold medal with the year 2000 on it.” He falls through the ice and drowns.

This story then studies the effect of this event on Jas’ family as the natural characteristics of each of the family members is magnified by the event. It begs the question of religion; does this age old unchanged religion help to cope with such a tragedy? Firstly, the mother who in her sorrow has no time for her children or for herself and clearly is torn with the thought of suicide. In her morbid state she provides no stability for the family as illustrated by the following quote from Jas who used to enjoy watching the stars:

I’ve learned that the heavens aren’t a wishing-well but a mass grave. Every star is a dead child, and the most beautiful star is Matthies – Mum taught us that.

The eldest son Obbe becomes obsessed with death and repeatedly tries to re-enact his brothers death, firstly with animals, drowning a hamster and looking on with Jas and becoming more and more dangerous. Jas herself, concious of the danger posed by her brother, nonetheless goes on to push her younger sister off of the bridge leading to “the other side” into the river just to see what would happen.

The lack of understanding between the generations, of what it is to be an adolescent, can best be illustrated by Jas’ father’s udder cloths:

He secures the cows between the bars, attaches the cups to their udders, then uses one of my old underpants covered in salve to clean them afterwards. I often used to feel embarrassed when Dad rubbed one of my worn-out pairs of knickers on the udders, or cleaned the milking cups with them without any kind of bashfulness – but sometimes at night I’ve thought about the crotch that has passed through so many other people’s hands, from Obbe’s to Farmer Janssen’s, and that they touch me that way, with calluses and blisters on their palms. Sometimes a pair of knickers gets lost among the cows before finally getting kicked between the gratings. Dad calls them udder cloths; he doesn’t see them as underpants any more. On Saturdays Mum washes the udder cloths and hangs them to dry on the washing line.

When things can’t get worse, they do. Foot and moith disease reaches the community and the family, disoriented by death, must now witness the killing of their cattle:

Death hasn’t only entered Mum and Dad but is also inside us – it will always look for a body or an animal and it won’t rest until it’s got hold of something.

The book then heads towards an ending that no longer surprises us.
This book was at times difficult to read, especially when addressing the deeds and missdeeds of the children and their sexual awakening in this, their troubled time. Violence, lack of conscience, morbidity and sexual experiments make for uneasy reading. We need to talk about Obbe!